One of Palmyra’s longest running family owned businesses will close its doors at the end of the month. 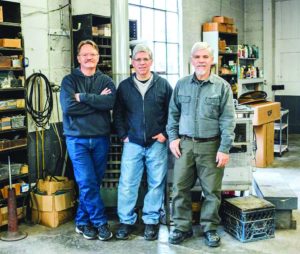 Greg, Gary and Larry Stuhlman stand inside the Stuhlman Moters shop where they have worked all their adult lives.

Stuhlman Motors, which was started 139 years ago as a wagon manufacturer, but later made a thriving transition to automotive accessory installation, will cease to operate at its only location at 515 S. Main Street March 31.

The owners and operators, Gary, Larry and Greg Stuhlman, agreed it has been a great run, but it was time to move on.

“We really have appreciated the city of Palmyra for all these years, the support,” Gary said.

“It’s been a great place to have a business,” Greg said.

Gary and Larry have reached retirement age and decided it was a good time to let it go after having started there as teenagers before going full time in 1972 and 1973 respectively.

“I’m going to take my wife’s advice and not say yes to anything for six months,” said Gary of retirement, which will include traveling to see their grown kids and grandchildren.

Gary said Larry and his wife are ready to welcome twin grandchildren and will soon be even busier in their off time.

Meanwhile, Greg, who went full time at Stuhlman’s in 1985, has decided to pull up roots and move to Wichita to be near his daughter.

“I had come to a place where I was juggling my future, and I decided to make a move and get a fresh start in a different location,” Greg said. “It’s a different challenge, but exciting at the same time.” 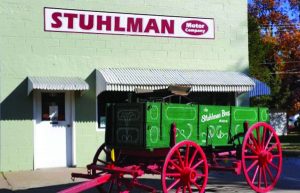 Started 139 years ago, Stuhlman’s successfully made the transition from horse-drawn vehicles to motor vehicles as evidenced by the restored Stuhlman’s wagon which parked in front of the business on S. Main St. The business, a member of the Palmyra Chamber of Commerce’s Business Hall of Fame, will close its doors March 31.

At one time, Stuhlman’s was one of Palmyra’s largest employers as a wagon manufacturing company started under the name of Schwartz and Stuhlman, starting with Conrad Stuhlman, who immigrated to the U.S. in 1853 at the age of 28.

And, it did very well in Palmyra until the advent of the automobile, which took off and  began to eat into the business.

“Cars were taking over, and in 1917 several of the wagon manufacturers were losing business. That was the beginning of the end for that.”

“But, instead of folding up, Stuhlman’s embraced the new technology. The boys’ father, Ralph, began doing automotive repair in 1947 and was going full time with that by 1950 when the present building was erected.

Stuhlman’s was doing mechanical repair work and even body work, before a new niche was found in installing air conditioning, starting in 1964.

“We figured we’ve done a total of more than 19,000 air conditioners,” Gary said.

And eventually came a whole gamut of accessory installation from radios and CD players to cruise control and remote starters.

Stuhlman’s was kept busy thanks to connections with about 125 car dealerships in a 100-mile radius, which would refer business to them.

“They kept us busy,” Gary said.

Eventually, however, many of the accessories became standard equipment on factory models. Some of that lost business was gained through work on vintage cars as well as other machines.

For example, they have installed air conditioners on anything from dump trucks to Port Industries ditchers.

They even recently installed AC on a firewood processor.

Many of the machines they’ve worked on have ended up in far-away places such as New Zealand, Saudi Arabia, Alaska and Hawaii.

Last year was not a good one due to the COVID-19 pandemic, but it has been on a surge of late, thanks to people restoring old cars.

The brothers said they have enjoyed working together over the years in harmony.

“We’ve got our work relationships and our home relationships, and we’ve worked well on that basis,” Gary said. “We don’t have much friction. Everybody has their job.

“We decided if one decided to quit, we’d all have to quit, because we rely on each other to do different parts of every job we’ve done.”

The brothers said they will stay busy pretty much up to their last few days when they will welcome well-wishers.