The PHS varsity baseball team managed to get a game played in between raindrops last week, and it was a good one. 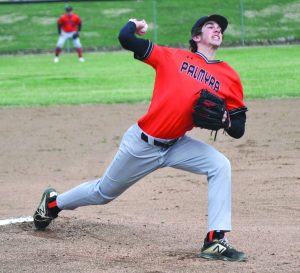 Palmyra’s Bennett Stice delivers a pitch against Elsberry last Wednesday. The senior would go four innings to earn the victory, striking out 11.

The Panthers used dominant pitching and two-out rallies to defeat Clopton/Elsberry, 3-0, on the home field Wednesday.

Bennett Stice and Landyn Smith combined to pitch a seven inning three-hitter, striking out 15 while walking one.

Meanwhile, the offense pushed across a single run in the fourth and added two insurance runs in the fifth as part of an eight-hit attack.

Palmyra had runners on in each of the first three innings before finally breaking through in the fourth when Alex Loman hit a two-out single, advanced to third on a single by Nolyn Richards and scored on a balk.

Elsberry was again just one out away from getting out of the fifth unscathed when Zane Meyers singled, scored on a double by Adam Goodwin who also crossed the plate on a single by Brody Lehenbauer.

Stice started on the mound and was overpowering, striking out 11 of the 15 batters he faced, and giving up just a walk and two singles, one of which was the only batted ball into the outfield against him.

Smith pitched the last three innings to earn the save, giving up one hit while striking out four with just one ball hit out of the infield.

The game had originally been scheduled for Tuesday, but was rained out. Friday’s game against Canton was also a washout and has been rescheduled for this Wednesday on the home field.

The Panthers are also scheduled to travel to Kirksville, Thursday.