The PHS baseball team went to 3-2 on the season last week with a loss at Kirksville and a win at home over Canton. 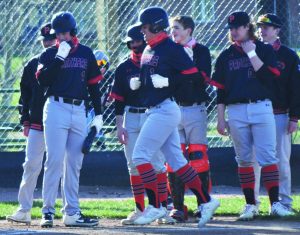 Kirksville scored three unearned runs with only one hit in defeating the Panthers 3-2 Friday.

Palmyra’s Landyn Smith led off the game with a single, moved to second on a single by Wes Begley and scored on a Kirksville error to give Palmyra a brief 1-0 lead.

But the Tigers responded in the bottom of the first when their lead-off hitter walked, stole second and scored on a fielder’s choice and error.

The game remained tied at one until the fourth when Kirksville added their other two runs on a dropped third strike, a walk, an error, a passed ball and a stolen base. 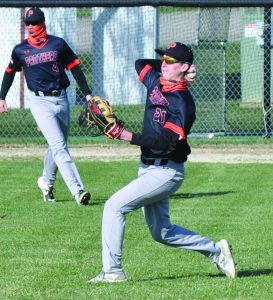 Palmyra’s Jon Lungberg fires the ball in from centerfield during action at home against Canton last Wednesday. 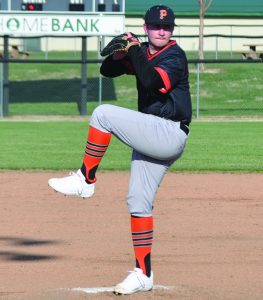 Palmyra’s Adam Goodwin winds up for a pitch during action against Canton last Wednesday.

The Panthers had two good opportunities to tie the game or take the lead, but could manage just one run.

Brody Lehenbauer singled with one out in the sixth and scored on a two-out single by Bennett Stice, who was thrown out at second base on the play.

The Panthers also got their first two batters aboard in the top of the seventh and had runners at second and third with nobody out but failed to score.

Stice started on the mound and went six innings, and giving up just two walks while striking out 12.

The Panthers out-hit Canton for a 12-5 win at home Wednesday on a day when the wind was blasting out toward right field.

Zane Meyers, a left handed batter, took advantage of the jet stream to blast a solo home run to right for the Panthers first run in the bottom of the first.

The Panthers scored a run in the third to take a 2-1 lead and then added to their advantage with a three-run fourth that featured doubles by Begley and Lehenbauer and a single by Alex Wilson.

Stice’s RBI single in the fifth gave Palmyra a 6-3 lead, which the Tigers cut to 6-5 in the top of the sixth.

But, the Panthers removed all doubt with six runs in the bottom of the inning keyed by singles from Adam Goodwin, Lehenbauer and Alex Loman.

Goodwin started on the mound and went the first three and two-thirds innings before being relieved by Nolyn Richards, Smith and Meyers.

The Panthers are scheduled to have a busy week with home games against Bowling Green Monday, and the conference opener against Macon, Tuesday, before competing in the Hannibal Cluster, Saturday.