The PHS varsity baseball team showed last week they can win with lots of hits or just a few, with home victories over Bowling Green and Macon. 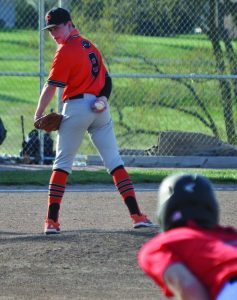 Palmyra’s Landyn Smith keeps an eye on a Bowling Green base runner before delivering a pitch during last Monday’s action.

The Bobcats scored four in top of the first and six more in the third to take a commanding lead, but the Panthers came back with seven in the bottom of the third, took an 12-11 lead with three in the fifth and one in the sixth.

Bowling Green scored a run in the seventh and needed just three outs to win, but didn’t get one.

Laydin Smith led off the bottom of the inning with a double and Begley blasted a home run over the fence in center to cap the unlikely victory.

Palmyra was out-hit 12 to 11, but committed just one error to Bowling Green’s three.

Begley also hit a three-run-home run in the fifth, and ended up with five RBI and three runs scored while being one of four Panthers with two hits along with Smith, Brody Lehenbauer and Alex Wilson.

Smith also hit a home run and double to add to Palmyra’s six extra base hits along with a triple by Adam Goodwin, and  a double by Bennett Stice. 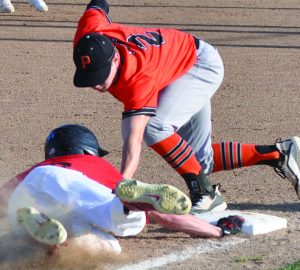 Goodwin started on the mound and was relieved by Smith, Chance Davis, Nolyn Richards and Zane Meyers.

The Panthers managed just two hits, but backed Stice’s shot-out pitching for a 4-0 win in their Clarence Cannon Conference opener over Macon Tuesday.

Palmyra scored all of its runs in the bottom of the first, and Stice made it stand up by throwing a complete-game two hitter, striking out 12, while walking just two.

He gave up just four batted balls to the outfield, including a single and three fly balls.

Palmyra scored its four runs with the help of two Macon errors, three walks, a hit-batsman, and a double steal of home and second.

The Panthers were supposed to compete in a cluster in Hannibal, but it was washed out.