The newly-elected Rusty Adrian, was handed the gavel by Loren Graham, who chose not to run again. 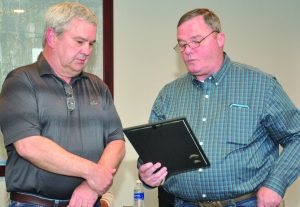 “I am genuinely looking forward to working with you all,” Adrian told the new council which also includes Ellen Goodwin (Ward 1), Patrick Barnes (Ward 2) and Earl Meyers (Ward 3).

Graham and Jeremy Warning, the outgoing Ward 2 council member, received council resolutions honoring them for their years of service to Palmyra.

“I’ve enjoyed working with all of you, and I appreciate what you do for the city. It’s been a pleasure,” said Graham, who also received a framed Missouri House of Representatives resolution sponsored by Rep. Louis Riggs.

The ordinances, which received their second and final readings, were recommended for passage by Chuck Anderson, the city’s new building inspector/code enforcer.

The council was all ready to vote to accept a bid for purchase of a new wheeled loader for the street department, but decided to table the issue until more information could be obtained.

Fahy asked Street Commissioner Austin Dornberger if leasing the piece of equipment might be better than an outright purchase.

Dornberger said he would check with the winning bidder, Martin Equipment, for leasing information in advance of the council meeting in special session yet to be set.

Dornberger had recommenced buying through state bid, a loader for $80,000 with trade-in of the city’s current loader purchased seven years ago.

The street department also got a bid to buy a new backhoe, but the council consensus was to hold off on that purchase in order to stagger purchases for budgetary purposes.

Fahy reminded the council about considering applying for a program designed to help revitalize downtown Palmyra, and suggested holding a special meeting to discuss the possibility with Corey Mehaffy, executive director of the Northeast Missouri Economic Development Council.

Meyers, chairman of the council’s Personnel Committee, said it was time to wrap up work on a revised city employee handbook, but noted a sticking point concerning the employee clothing allowance.

It was decided another committee meeting needed to be held to resolve the issue.

Behring reminded the council of the need to complete efforts to enforce the hold-harmless paperwork needed from volunteers at the Palmyra Recycling Center.

The city’s liability insurance carrier, MIRMA, has put pressure on the city during the past year to require signed paperwork from all the city’s volunteer helpers.

However, the city has not received the paperwork from members of all the groups who help out at the recycling center.

City Clerk Deena Parsons said council members will probably have to take a more active roll in making sure the paperwork is completed.

Police Chief Eddie Bogue announced the hiring of a new police officer, Steven Kolthoff, who was expected to go on the job April 22.

BPW Superintendent Brent Abell, said the board will be seeking bids to repair a sewer line and will seek council approval for the project.