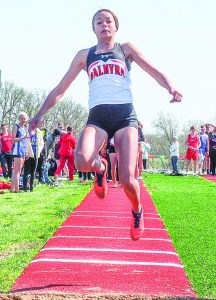 The Lady Panthers scored 109.5 points to finish just 7.5 points behind first place Hannibal and ahead of 11 other teams.

“The girls did really well,” said Coach Nicholas Koetters of the showing.

“We finished second as a team which is great considering we had half our distance squad not running, and we didn’t use either of our triple jumpers.

“We have a few injuries here and there and wanted to let people rest a little right now.”

Jaynee Durst took second  in the javelin with a throw of 109 feet, 6.25 inches, just missing the school record;

Loman took third place in the pole vault at 2.58 meters;

Drew Billups took fifth in the shot put at 29.30 meters;

“Even though we weren’t at full strength, I was impressed with how well the girls did and how hard they competed all night,” Koetters said.

The team also competed in the highly competitive 61st annual Licklider Relays in Jefferson City Saturday and placed 13th out of 18 teams which included Jefferson City, Columbia Hickman and Nixa.

Also 1,600 meter medley relay team of Grace Krigbaum, White, Loman and Sheputis took second behind Nixa with a time of 4:44.41.