The PHS varsity baseball team continued to dominate the opposition, going 3-0 last week and winning the three contests by a collective score of 36-3. 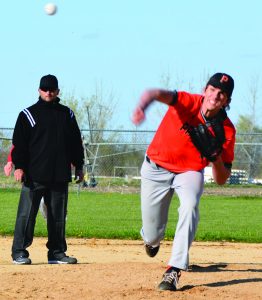 The Panthers (8-2) stretched their current win streak to five, with a 7-1 victory at Moberly Saturday.

Palmyra out-hit Moberly 6-2 to back the strong pitching by Bennett Stice, who went to 5-1 the season.

The Panthers scored two runs in the second, single tallies in the third and fourth and two more in the fifth before Moberly scored its only run.

Zane Meyers had two of the team’s hits while Alex Loman recorded the only extra base-hit, a two-run double in the fifth. 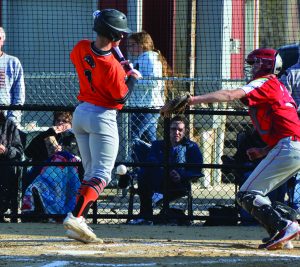 One of the hits was a fifth-inning triple that resulted in Moberly’s only run, the first earned run recorded off of Stice this season after

The Panthers went to 3-0 in conference play with an 11-2 home win over Monroe City Friday.

Palmyra’s Wade Begley, Landyn Smith and Stice all hit triples as part of the team’s 12-hit attack that led to a 3-0 lead into the fifth when the Panthers plated five. 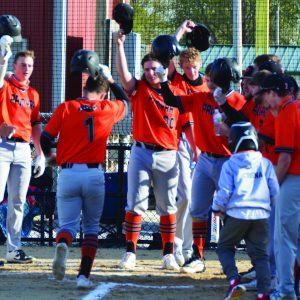 ….and is later greeted at home after a home run (right) at Clark County Tuesday. (NEMO Media photos)

The Panthers also traveled to Kahoka Tuesday for a three-inning, 18-0 win over Clark County.

Stice pitched all three innings, striking out seven of the 12 batters he faced, while giving up just one hit and two walks.

The offense was led by Richards, who hit a three-run home run and Meyers who blasted a solo shot. Begley and Loman also contributed doubles.

This week, the Panthers were were scheduled to travel to Hallsville, Monday, and host Highland, Tuesday, and Brookfield, Friday.