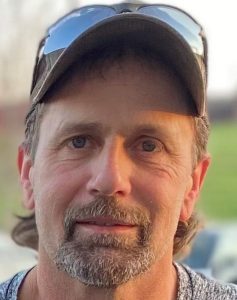 Curtis was born Nov. 18, 1965, in Hannibal, Mo., to George Elmo and Patsy Ann (Browning) Lieurance. Curtis married Patricia Fleer-Costigan Lieurance in 2000 and together they had one daughter.

He was preceded in death by his parents.

Curtis was a plumber for 25 years, first working for Vinson & Sill Inc. and Peters Heating & Cooling in Illinois. He was very experienced with a mini excavator for his work. In 2015 Curtis started his own company, Lieurance Plumbing, quickly building a successful business.

Curtis was an avid St. Louis Cardinal fan for his entire life. He loved to play and coach his kids in softball. His passion was archery hunting, and he has had the opportunity to hunt elk, wild hogs, mountain lions and other big game animals.

He enjoyed attending Whitetails Unlimited events whenever he could and was a lifetime member of the National Rifle Association.

A family man, Curtis cherished spending time with his kids and grandson.

Funeral services will be held at 10 a.m., Friday, May 28, at Lewis Brothers Funeral Chapel in Palmyra. Pastor Larry Smith will officiate. Burial will be at Center Cemetery in Center, Mo.

Honorary pallbearer will be Pete Dames.

Friends and family are invited to Curtis’s life celebration at a visitation that will be from 5 to 7 p.m., Thursday, May 27, at Lewis Brothers Funeral Chapel.

Memorials may be made to Whitetails Unlimited.