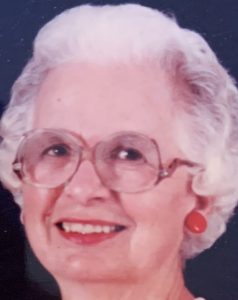 Selma was born on Nov. 26, 1920, in Marion County, Mo., the only child of Charles Theodore and Sophia Henrietta Mette Straub. She grew up on the family dairy farm and graduated from Crabapple Elementary School.

In 1940, the family moved to Hannibal where she held numerous jobs, including employment at Wendt Sonis Carbide Tool Company during World War II.

On Jan. 1, 1946, she married Frederick Charles Kaden. She was a homemaker and assisted her husband in farming on Glendale Farms near Monroe City, Mo.

In 1961 they moved to their farm in Ralls County, near Monroe City where she continued to assist her husband in farming. She also worked at several different jobs outside the home, including Kuhlman Diecasting from 1963 to 1970. In 1993 they sold their farm and moved to Monroe City.

Selma was baptized, confirmed and married at Immanuel Lutheran Church, West Ely, where she and her husband remained members until becoming members of Our Savior Lutheran Church in Monroe City in January 1985.

Selma loved to hand piece special quilts and quilted them by hand. She also enjoyed entertaining and playing cards with family and friends.

During the last 13 years of her life, she received the loving care of and personal friendships with employees of Luther Manor Retirement and Nursing Center and more recently also the Community Loving Care Hospice. Many of these people became family to her.

In addition to her husband of 62 years, Selma was preceded in death by her parents; stepfather, Louie Drebes; stepsister, Marian Daniel; and son-in-law, John Wedig.

Funeral services will be held at 10:30 a.m. on Saturday, June 12, at Our Savior Lutheran Church in Monroe City, with the Rev. Scott Salo officiating. Burial will be in the West Ely Lutheran Cemetery.

Visitation will be from 9 a.m. until the time of service on June 12 at Our Savior Lutheran Church.

Memorials may be made to Our Savior Lutheran Church, West Ely Cemetery Association or Community Loving Care Hospice.

Funeral arrangements are under the direction of Garner Funeral Home & Chapel, Monroe City.

Online condolences may be made at garnerfuneralchapel.com.