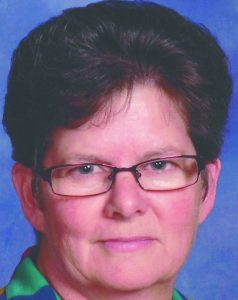 Besides her husband, she was also preceded in death by her father and one son, Jerrud Tallman.

Sheryl had been employed by River Hills Village in Keokuk for 33 years.

She was a member of New Testament Christian Church in Keokuk.

Sheryl enjoyed camping, fishing and reading western romance novels. She was a skilled seamstress and made all kinds of clothes through the years. She also enjoyed making handmade crafts for her family and friends to enjoy.   Sheryl was an avid St. Louis Cardinals fan.

She was a devoted wife and mother, raising her children, and family was the most important aspect of her life.  She loved attending her children and grandchildren’s activities and showered them with encouragement and praise.

A funeral service will be held at 11 a.m., Monday, Aug. 16, at the Vigen Memorial Home in Keokuk, with Pastor Dawn Farris officiating. Burial will be in the Keokuk National Cemetery.

Visitation will be held after 2 p.m., Sunday, Aug. 15, at the funeral home with family meeting with friends from 4 to 6 p.m.

Online condolences may be sent to the family at www.vigenmemorialhome.com.