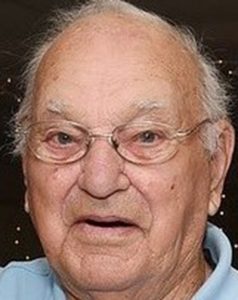 He was preceded in death by his parents and three sisters, Cleo Dooley, Hazel Lombardo and Joyce Kemp.

Grant joined the United States Marine Corp and served his country during the Korean Conflict.

He was a man who loved all things carpentry. At 17 years old, he helped his dad build a house and continued in the trade for the rest of his life.

He enjoyed spending leisure time fishing in local fishing holes. Above all, Grant was a family man who dearly loved spending time with his friends and family.

Friends and family are invited to Grant’s life celebration at a visitation that will be from 5 to 7 p.m., Tuesday, Aug. 24,  at Lewis Brothers Funeral Chapel. Rosary will follow at 7 p.m. with Deacon Bob Leake.

Memorials may be made to St. Joseph Catholic Church or Community Loving Care Hospice. Online condolences may be shared, and video tribute viewed at www.lewisbrothersfuneralchapel.com.