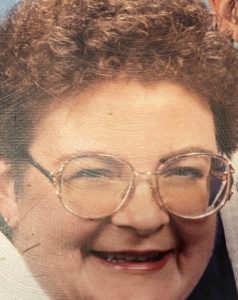 She was preceded in death by her grandparents, parents, aunts and uncles.

Carol resided in Kansas until 1975. starting in Clay Center, Kan., Atchison, Kan., and then to Kansas City, Kan.

She attended several grade schools and finished up with attendance at Arrowhead Junior High and finally Washington High School, graduating in the spring of 1966, in Kansas City, Kan. Carol took secretarial classes mainly, two full years of shorthand and was in the band class and enjoyed music and marching.

After school she went to work in Kansas City, Mo. as a receptionist for a small life insurance company in November of 1966. She attended night school on her own, studying basics of insurance and other classes, after which she went to work for the St. Paul Insurance Company, taking dictation and operated a dictaphone for co-workers.

She was promoted quickly to rater and then eventually into underwriting. Carol worked for Hawkins Insurance Agency for almost 10 years in Edina, Mo., moving to Palmyra in 1981, with Mr. Hawkins business for her insurance career.

Carol was a member of the American Legion Auxiliary in Palmyra.

Carol became a single foster parent and had two foster girls when she married Roger Lee Myers of Palmyra on June 20, 1987. In November 1988 they were blessed with a  nine-month-old  foster baby girl, and again in June of 1992, the were blessed with a three-day old baby and an 18-month-old baby girl who were siblings to their daughter. Two of the children keep close contact as they were adopted at a young age.

Carol was a member First Presbyterian Church in Palmyra.

Funeral services will be at 2 p.m., Wednesday, Oct. 13, at Lewis Brothers Funeral Chapel.

Friends and family are invited to Carol’s life celebration at a visitation that will be from 1 to 2 p.m. on Wednesday, Oct. 13, at Lewis Brothers Funeral Chapel.

Memorials may be made to the Shriner’s Children’s Hospital.