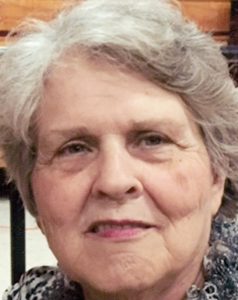 Evelyn was a farmwife and homemaker but she also worked at Casey’s in Palmyra, and worked as the biscuit maker at Hardee’s for 25 years.

She loved to attend all of her children’s and grandchildren’s sporting events. She enjoyed coloring, doing puzzles of all kinds, playing cards, playing Scrabble, and also loved to bake with her granddaughter.

Christmas was her favorite holiday and there were many, many amazing family memories that entailed Christmas.  She especially enjoyed going on sister weekends and having a rowdy time with her family.

Funeral services will be at 10 a.m., Thursday, Oct. 14, at Lewis Brothers Funeral Chapel. Pastor Wes Gehrke will officiate. Burial will be at Greenwood Cemetery in Palmyra.

The funeral service will be live streamed through Lewis Brothers Funeral Chapel. Follow the link on their obituary page or go to (https://my.gather.app/family/evelyn-peuster). The live stream will start shortly before the service begins.

Honorary pallbearers will be Mark Rathbun and her grandchildren.

Friends and family are invited to Evelyn’s life celebration at a visitation that will be from 6 to 8 p.m., Wednesday, Oct. 13, at Lewis Brothers Funeral Chapel in Palmyra.

Memorials may be made to Zion Lutheran Church.