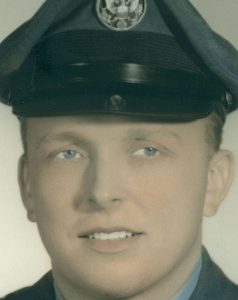 Michael attended Day school in Warren, Mo., Spence school, in Heather, Mo., Philadelphia High School and Adams, Irving and Quincy High School, Quincy. Michael tended bar legally all through his high school years 1945-1950. It was legal at that time because it was his dad who held the bar license.

He spent 26 years in the United States Air Force. He was a veteran of the Korean Conflict, Vietnam War, the “Cold War”, and Desert Storm. He spent seven years overseas during his military career in France, the Philippines and Alaska, which at the time was not a state, and was considered overseas by the military.

During his military career, he was selected to serve in a very honored group where only the top 4 percent were considered for the highly top-secret World Surveillance Operation. During any of their duty stations they wore civilian clothes bit only while on duty, at government embassies, etc. He was very proud to have been selected to serve with this very important mission.

Michael was very active in sports during his military career, sharing in 39 championships in softball, football, basketball, golf and volleyball. He loved to golf and fish, continuing to do both until well into his 80s.

An avid traveler, he visited 179 of the 195 countries in the world. He went on 54 cruises. he made six “around the world” trips, four by sea and two by air. Three of the around the world excursions were over 100 days each. He also visited over 325 ancient heritage sites around the world.

During his lifetime Michael wrote four books, The History of Union, Round Grove Townships, Travels of a Country Boy, The MCRII Lady Mustangs Championships Years, and Lifetime Experiences of Michael B. Rager. He donated copies of his book on Union and Round Grove Townships to the Philadelphia Development Committee, which sold enough copies to help purchase a tornado siren for Philadelphia, Mo., and he was very proud of that.

The family is under the care and direction of Lewis Brothers Funeral Chapel in Palmyra.