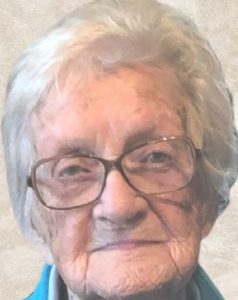 Pauline was born June 29, 1922, in Ashton, Mo., at home on the family farm, the daughter of Paul Stanley and Myrtle (Elsie Smith) Glasscock.

She graduated from Keokuk High School in 1940 and played on a traveling softball team after high school.

She worked at the Keokuk Shoe Factory as a young woman, and later moved to Quincy, where Pauline was employed at the Illinois Veteran’s Home for 24 years until her retirement in the early 1990s.

Pauline was a member of Bible Baptist Church in Quincy, and belonged to several Baptist churches throughout her life.

She was an avid bowler for many years and belonged to a canasta club. She enjoyed spending her free time playing Scrabble, fishing, walking and taking care of her yard. She also loved to read. Most of all, she loved her family dearly, especially her children and grandchildren.

Funeral services will be held at DeJong-Greaves-Printy Funeral Home at 11 a.m. on Saturday, Feb. 5, followed by burial at Sunset Memorial Park in Keokuk.

Visitation will be held at the funeral home from 10 a.m. until the time of service on Saturday.

Memorials may be directed to the Wounded Warrior Project.

Tributes and condolences may be left at www.dejongsfuneralhome.com.