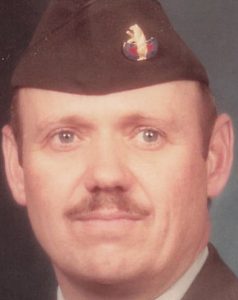 Rocky was born on Dec. 14, 1946, in Hannibal, the son of Robert L’Vere Threlkeld and Helen (Lowe) Threlkeld. Helen would later marry Jasper Charles Shrum Sr., who would play a significant role in Rocky’s life, raising him as his own.

He was preceded in death by his father, Robert L’Vere Threlkeld; his dad, Jasper Shrum; his mother, Helen; sisters, Martha Whittaker and Janet Loyd; and a grandson, Aaron Johnson.

Rocky was a decorated soldier. He served in the United States Army and was a member of the 82nd Airborne. After this he went into the National Guard and was the state of Missouri’s top recruiter. He travelled all across the state, visiting high schools and building relationships with young people giving many of them hope of a better future serving their country.

Rocky could not sit still. After retiring from the military, he would go on to be an insurance agent, work for General Mills and later be a security guard.

He loved softball, roller skating, mowing grass and most of all talking to people. Rocky didn’t know a stranger. Often his family would ask him who a person was he had just been visiting with and he would comment, “I don’t know; I just met them!”.

Funeral services will be held at 11 a.m., Tuesday, Feb. 15, at Grand View Funeral Home. Michael Erwin will officiate. Burial, with full military honors, will be in the Grand View Burial Park following the service.

Visitation celebrating Rocky’s life will be held from 5 to 8 p.m., Monday, Feb. 14, at the Grand View Funeral Home.

Memorials may be made to the family in care of Grand View Funeral Home.

Online condolences may be made to the family and video tribute viewed on Rocky’s memorial page at www.grandviewfuneral.com.