Phyllis was born Aug. 30, 1936, in Wilkes County, N.C., to Franklin Glenn and Cordie Livingston Mathis. She was married to Clement Goodin Sr. on March 3, 1956, in North Carolina. 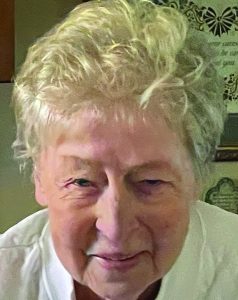 During her career, Phyllis owned her own beauty shop for 13 years before changing paths and working for the Marion County Ambulance District for several years. Later, Phyllis owned and operated two restaurants before retirement.

A social butterfly with a servant’s heart, Phyllis loved doing things that involved being around other people, whether that was playing cards, such as four point pitch and black jack, or gathering together to share stories and fun-times.

Phyllis loved to cook and bake and was well known for her peach and lemon meringue pies. She had a heart of gold and compassionate spirit that was always there for her family and friends. She cherished every moment spent with her grandchildren, lavishing them with encouragement and love.

A graveside service will be held at 10:30 a.m., Saturday March 12, at the Philadelphia Cemetery in Philadelphia, Mo. Pastor Jack Shulz will officiate.

Friends and family are invited to Phyllis’s life celebration at a visitation that will be held from 5 to 7 p.m., Friday, March 11, at Lewis Brothers Funeral Chapel.

Memorials may be made to Bethany Baptist Church or the Philadelphia Cemetery.