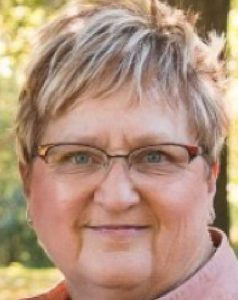 She was preceded in death by her father and a brother in infancy, Charles Andrew Waters.

Tammy worked at American Safety in Palmyra for 10 years and retired from Lewis County REC after 32 years.

She loved fishing at Bennett Springs, camping, mushroom hunting, crafting, quilting, going to car shows and driving her 2008 red Corvette. She loved cruising with her family and was the official “activity director” of the Cruisin Cousins.

She enjoyed spending time with her grandsons and family.  She was an avid Kansas City Chiefs football fan and was a season ticket holder.  She was a member of the Hester Community Church.

Funeral services will be held Tuesday, March 22, at 11 a.m. at Hester Community Church in rural Maywood, with Rev. Lance Bonnell officiating. Burial will be in Maywood Cemetery.

Visitation will be Monday, March 21, at Hester Community Church from 4 until 8 p.m.  Family requests you wear your Kansas City Chiefs attire/colors at the visitation.

Memorials may be made to the Maywood Cemetery Association.

Online condolences may be left at www.davis-fh.com.