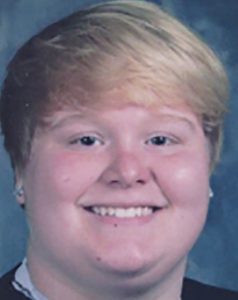 Morgan was preceded in death by her great-grandparents, Dick and Norma Litchfield; great-grandmother, Dorothy Baca; and best friend, Jacob Hamm.

Professionally, Morgan worked at Ascend in Barry, Ill., and as a sandwich artist at Subway in Hannibal.

Morgan had a passion for being in the kitchen, always cooking for everyone. One of her specialties was the $16 burger which included pizza, pasta, chicken and macaroni and cheese.

Morgan was a tomboy. She loved racing four-wheelers, going to skate parks and playing football and basketball. She was a great three-point shooter, could spin a basketball on her finger, and juggle.

Morgan enjoyed swimming and loved the water but not so much the sun, although she was a ray of sunshine and always made people feel better with her happy personality and positive attitude. She loved to travel and a few of her favorite spots were Branson, Chicago, California and Gatlinburg. She will be missed by all who knew and loved her.

Funeral services will be at 2 p.m., Saturday, April 9, at the James O’Donnell Funeral Home in Hannibal.  Pastor Eric Anderson will officiate. Burial will be at Mt. Olivet Cemetery in Hannibal.

Friends and family are invited to Morgan’s life celebration at a visitation that will be from 5 to 7 p.m., Friday, April 8, at funeral home in Hannibal.

Memorials may be made to Hannibal Parks and Recreation.

Online condolences may be shared and video tribute may be viewed at www.jamesodonnellvuneralhome.com.