Explaining the four pillars as to why men and women are willing to sacrifice themselves for this country, W.T. Johnson addressed a crowd of around 100 citizens at this year’s Memorial Day service at Greenwood Cemetery. 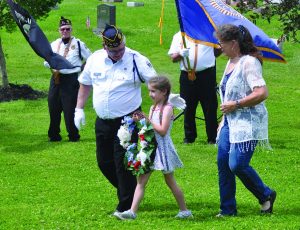 The American Legion held its annual Memorial Day service at Greenwood Cemetery Monday. This year’s Poppy Girl, Olivia Pruett, is led by Shelby Pugh and Marcia Fohey to lay a wreath at the base of the flag pole.

Johnson, a Palmyra native, who spent two years in service after being drafted in 1969, was this year’s guest speaker at the event, which honored fallen veterans.

The service was sponsored by the American Legion Boots-Dickson Post #174.

In opening his speech, Johnson said he was told once if you want to be seen, stand up.

“Well, I am here to stand up out of respect for our fallen comrades,” he said, adding he was also told to be heard, speak up. “I am also here to speak up on behalf of myself and a grateful nation for those who make the supreme sacrifice for us.”

He also noted those men and women came for all parts of the country and from all backgrounds, but shared a common goal – to make life better for others. 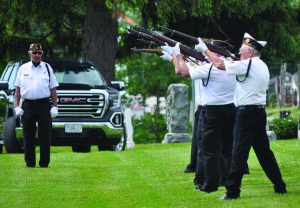 “These diverse men and women are forever in our hearts, but for those who knew them, they are forever young,” he

“From the American Revolution to the Global War on Terrorism, more than one million American veterans have made the supreme sacrifice,” Johnson said. “They died so that we could continue to cherish the things they loved, God, country and family.

According to Johnson, the founders of the American Legion found four common pillars as why American answer the nation’s call to service.

First, they answer because it helps provide a strong national defense “against our enemies foreign and domestic”.

Second, they do it for their fellow comrades, Johnson said, noting that scripture says there is no greater love than laying down your life for a friend.

And finally, the call has been answered for their children and others’ children so “they can grow up in a country that is strong and free.”

That fourth pillar is the reason why Americans must continue to honor the spirit of the fallen heros.

“We must remember and share the legacies and stories of those who are no longer here,” Johnson said. “And protect our children at all cost.”

Johnson noted there are several ways to honor those spirits, including by attending events, such as the Memorial Day service, telling the soldiers’ stories as much as possible and finding a way to support and take care of their loved ones.

One way to help take care of the loved ones of fallen comrades is through the American Legion Legacy Scholarship, Johnson said, noting those scholarships will ensure  “a college education will be a reality for these heroes’ children.”

While there is nothing wrong in celebrating Memorial Day with barbecues, picnics and parades, Americans must remember that freedom is not free, Johnson said.

“Memorial Day is about remembrance and gratitude,” he added. “It is about honoring the men and women who made it possible for us to gather here today in peace.

“They truly were, are and will be the guardians of our freedom.”

Following the guest speaker, American Legion Auxiliary poppy chairperson, Marcia Fohey, introduced the poppy girl, Olivia Pruett, who laid the wreath at the base of the flag.

This was followed by the 21 gun salute and the playing of “Taps.”

American Legion Post Commander Rick Hoenes opened the service by welcoming all and explaining the meaning of Memorial Day.

“It is a day to honor veterans around the country who have gone into armed forces and then gone on to their all time commander and chief,” he said.

During the flag raising ceremony, Isaac Gottman led those in singing “The Star Spangled Banner.” He also performed “My Country Tis of Thee” and “Lead On O King Eternal.”

Hoenes also closed the service reminding those in attendance to pledge themselves to the patriotic service, noting only 1 percent of this nation’s population defend it.

“It just takes a small percentage to carry on and keep our country free,” he said.

Chaplain Dale Elston offered prayers to open and to close the service.