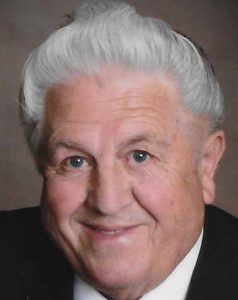 Don graduated from Kahoka High School with the Class of 1957. He joined the Iowa Army National Guard in 1961 and proudly served for six years.

On Nov. 17, 1962, he was united in marriage to Rosalie Raymond at St. Mary’s Catholic Church in Keokuk, Iowa. They were married for 59 years. She survives.

He was preceded in death by his parents and a brother, James Arthur Clift; brothers-in-law and sisters-in-law, Harold J. Raymond and wife, Linda; Marilyn Griggs and husband, Albert; Ron Raymond, and aunts and uncles.

Don was of the Methodist faith and attended St. Michael’s Catholic Church with his wife. He was a member of the Frazee Cemetery Board for many years. He was also a member of the Herman Blum Post 192 of the American Legion.

Don was a lifelong farmer which he loved. His grandchildren looked forward to riding the tractor with him.

Telling jokes and making people laugh was his specialty. He wrote annual birthday poems for his wife and daughters which they treasured.

In his younger years he enjoyed fishing, hunting, square dancing and playing volleyball. Don was a wonderful husband, father and grandfather. He especially loved the time he spent with his family and friends.

A Mass of Christian burial will be held 11 a.m. Friday, June 10, at St. Michael Catholic Church in Kahoka with Father Rob Fields officiating. Burial will be in the Frazee Cemetery.

Visitation will be held after 1 p.m. Thursday, June 9, at the Vigen Memorial Home in Kahoka with the family meeting with friends from 5 to 7 p.m. A wake service will be held at 5 p.m.

Memorials are suggested to Frazee Cemetery or Donor’s Choice.

On-line condolences may be made to the family at www.vigenmemorialhome.com.