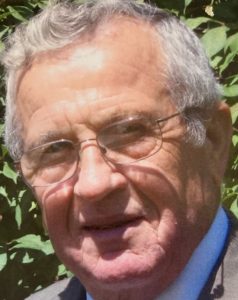 Allen served his country during the Korean War for the United States Army working as a medic. He was a kind, generous, playful and loving man of God.  He had a

great sense of humor and knew how to make people feel comfortable in any situation.

As a young man, Allen was a farmer. He then transitioned to owning Midwest Childcare centers, where he had a heart for children. He finished his career as a salesman.

Allen and Rosemary looked forward to fishing trips to Minnesota, catching walleye and perch. Over the years, they enjoyed trips to Florida with family and friends.

His family will always remember his fun antics, tender heart and the love he had for them.

Allen was a member of the Apostolic Christian Church of Taylor for many years, where he served faithfully.

Visitation will be held from 4 to 6 p.m., Sunday, Aug. 28, at the Apostolic Christian Church of Taylor. All are welcome.

Memorials may be made to Apostolic Church of Taylor or Apostolic Christian LifePoints, a Christian home serving those with disabilities.