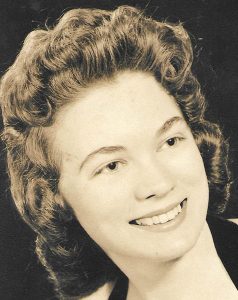 Theresa was preceded in death by her parents; her husband, Harry Eugene Kindhart; one son, Charles Albert Kindhart; one sister, Alice Harbison; and two brothers, Gayle Welty and Lynn Welty.

Theresa and Harry started Kindhart Plumbing and Heating in 1972. It grew over the next 26 years and was a thriving business in Palmyra until 1998.

Theresa was a lifelong and active member of the First Baptist Church in Palmyra. She was involved in many civic events and community groups over the years such as the Heritage Seekers Historical Society and the Maple Lawn Nursing Home Auxiliary.

Among Theresa’s favorite interests were reading, crafting and sewing. She loved country music. She was an avid collector of Victorian ceramic shoes and enjoyed searching for buttons for her button collection.

Theresa liked to cook and was always on the lookout for a good recipe. She was a gardener and looked forward to the homegrown tomatoes every year.

She was a strong and independent person with a great capacity to love and care for those around her. She took great pleasure from spending time with her entire family and returned to her central Illinois roots often.

She will be dearly missed and remembered by all who knew and loved her.

Memorials may be made to the First Baptist Church in Palmyra.