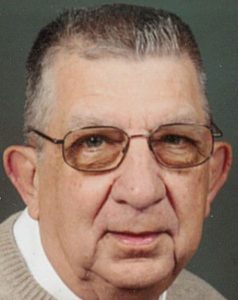 He was a 1952 graduate of Quincy High School. He was married to his wife of 44 years, Lois Ruth Ward, on April 15, 1978 at Luther Memorial Church in Quincy. She survives.

During his career, Kenneth worked in quality control for several manufacturing plants including, Motorola, Gates, Firestone/Electric Wheel and Kuester Tool and Die.

He and his wife moved to Arizona for 13 years where he worked for Can’t Strip Corp and Special Devices and played a LOT of golf.

Upon retirement, he returned to the area and worked for Palmyra Parks & Recreation and  Jackson Park Golf Course. He mentored at Palmyra Elementary School and was a volunteer at Maple Lawn Nursing Home.

He joined the United States Air Force during the Korean Conflict.

Kenneth was a comedian and practical joker, who for years, loved to travel to local communities to perform comedy/pantomime shows to Spike Jones.  To laugh and have fun was the name of the game for Kenneth.

Throughout his lifetime, sports played a major role in his life. For many years he played fast pitch softball, and the Firestone team would even go to the Fort Madison prison and play against the inmates.

His love of sports continued on as he followed collegiate level sports and was a major fan of the QHS Blue Devils and St. Louis Cardinals.

After moving to Palmyra, he became a booster for the Panthers and loved to catch a game whenever he could. He played golf whenever he could until his health became an issue. He enjoyed watching talk shows, sports, westerns and war movies in his free time.

Fun and games aside, Kenneth cherished his wife, children, grandchildren and family and the times they spent together.

The family is being served by Lewis Brothers Funeral Chapel in Palmyra. There will be no services at this time.

Memorials may be made to your choice of Community Loving Care Hospice, Palmyra Nutrition Center or Palmyra United Methodist Church Building Fund.