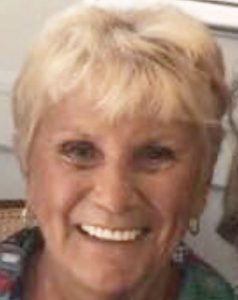 Rita was preceded in death by her parents; and brothers, Tom Hill and Desmond Hill.

As a native of England, Rita loved following the British Royal family and loving them from afar, but her most passionate pursuit was dance. She was a professional dancer and later owner of Rita Nelson’s School of Dance for many years.

Music being a big part of a dancers soul, Rita enjoyed classical music and show tunes most often. She was thrilled when she had the opportunity to meet Nat King Cole during her dancing career.

Rita was very involved with the community, whether that was through fall festivals, the fair or working on one of the many pageants that she coached and judged “her girls.” Many years ago, she started the first Miss Palmyra Pageant.

Rita enjoyed both crochet and knitting needlework, often making something for someone. In her free time, Rita would head outdoors and play a round of golf, enjoying the game, the exercise and the sun when possible.

A wonderful person and beloved wife and mother, Rita will be missed by all who knew her.

A funeral service will be held at 10 a.m., Thursday, Jan. 12, at Lewis Brothers Funeral Chapel. Pastor Mark Carpenter will officiate. Burial will follow at Greenwood Cemetery in Palmyra.

Honorary pallbearers will be all of Rita’s pageant girls.

Friends and family are invited to Rita’s Life Celebration at a visitation that will be held  from 5 to 7 p.m., Wednesday, Jan. 11, at Lewis Brothers Funeral Chapel in Palmyra.

Memorials may be made to Blessing Hospice or St. Jude Children’s Hospital.