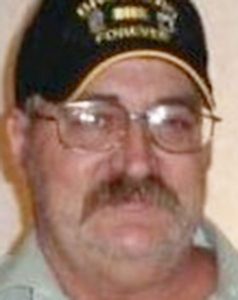 Gary was preceded in death by his parents; brother, Johnny Jones; and two sisters, Debbie Swart and Robin Jones.

As a young man Gary followed a long standing family tradition and served his country in the United States Army from 1968 to 1977. He served two tours of duty in Vietnam as part of the 588th Combat Engineers. Like most military veterans Gary relished telling stories from his younger days served overseas.

In 2017 he was honored to be chosen as an Honor Flight recipient to experience and pay his respects to his fallen comrades at the Vietnam Veterans Memorial in Washington, D.C.

Gary was a “good ole country boy” who took life with a grain of salt and was happy to lend a hand to a friend, usually in the form of helping someone out. He often would help work hogs and haul grain for friends and neighbors, Kenneth Swisher and Joe Swisher.

For many years, Gary was often on the road working as part of a team of heavy equipment operators working together laying telephone cable in various states.

Gary considered himself a shade tree mechanic, working out in the yard tinkering on one car or another. He enjoyed watching a good western on TV and was a Dodge Mopar man. Whether it was enjoying a St. Louis Cardinals game on the radio, listening to one of his many country albums, sitting down with his family for a game of cards or telling stories of the good old days, sharing words of wisdom, Gary enjoyed the simple things in life with a focus on God and his family.

Gary was a member of Bethany Baptist Church, giving his life to Christ in 1980, and as an ordained deacon, he was always happy to help serve his church family.

A funeral service will he held at 11 a.m., on Saturday, Jan. 14, at Lewis Brothers Funeral Chapel, Palmyra, Mo. Pastors Dewayne Larenson and Greg Mitchell will officiate. Burial with military honors, performed by Boots-Dickson American Legion Post #174, will be at Bethany Baptist Church Cemetery in Philadelphia.

Honorary pallbearers will be his brothers, Tommy Jones, David Jones and Steve Jones; and grandsons, Gauge Jones and Jackson Jones.

Friends and family are invited to Gary’s Life Celebration at a visitation that will be held from 10 a.m. until the time of service on Saturday, at Lewis Brothers Funeral Chapel.

Memorials may be made to the American Legion or the VFW of Palmyra.