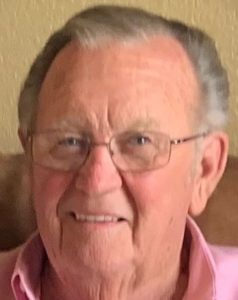 Bill was preceded in death by his parents; his mother-in-law and father-in-law; sister, Norma Davis; and brothers-in-law, Ronnie Wiewel and Gene Harlan.

If you were blessed to know Bill, then you knew a man who loved his family beyond measure; the kind of man who relished spending time with his girls, even when that meant taking them shopping or waiting patiently for them while they were off doing their thing.

He could talk to just about anyone, and often would be held up visiting with one person or another.

He had a love of traveling, enjoying the many trips the family took together, visiting New York, Hawaii, Lake Barkley in Kentucky, Colorado and Florida. For their 60th anniversary, Bill and his wife enjoyed the San Antonio River walk, a scenic walk along the river and a beautiful way to celebrate 60 years together.

Bill had a newfound love of coffee, often stopping by Hebrews coffee truck for his “Mocha Mocha.” Bill was fond of watching Gunsmoke or the Jackson Barrett Car Show, dancing and listening to old time country music of Loretta Lynn or Charlie Pride.

A funeral ceremony will be held at 10 a.m., Wednesday, Jan. 18, 2023, at the Lewis Brothers Funeral Chapel in Palmyra. Pastor Mark Carpenter will officiate. Burial will be at Maywood Cemetery in Maywood, Mo.

Friends and family are invited to Bill’s life celebration at a visitation that will be Tuesday, Jan. 17, from 5 to  7 p.m. at Lewis Brothers Funeral Chapel.

Memorials may be made to Mt. Olivet Church of Taylor.