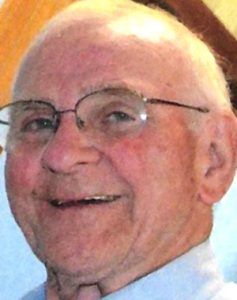 Bob was born Oct. 11, 1932, in Palmyra, to Emmitt and Lizzie Kroeger Powell. He is survived by Keithea (Bronestine) Powell, who he married on Aug. 1, 1964, at St. Joseph Catholic Church of Palmyra.

Bob was preceded in death by his parents; his daughter, Lisa Marie Powell; and eight siblings.

He served in the United States Army during the Korean War.

Bob worked at Stevens Cleaners during high school and became the manager in 1955. He purchased the dry cleaning business in 1965.  He renamed it NEMO Cleaners and it has been a landmark in downtown Palmyra and was one of the first businesses inducted into the Palmyra Business Hall of Fame.

Bob was a past president for Kiwanis, the head of Key Club, and member of the Jaycees and many other organizations within the Palmyra community. Bob also spearheaded the development of Jackson Park Golf Course, Teen Town, the Khoury baseball program and the Sesquicentennial Celebration of 1969.

With all of the great groups and organizations that Bob was a involved in and honored for, his greatest achievement was his family.

He was a member St. Joseph Catholic Church and the Knights of Columbus.

Visitation will be from 4 to 7 p.m., Monday, July 13, at Lewis Brothers Funeral Chapel in Palmyra. Prayer Service will be at 7 p.m.