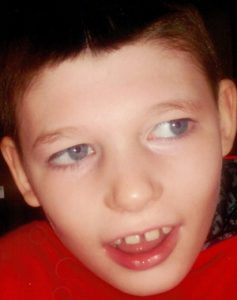 Evan was born Oct. 30, 1998 in Hannibal, Mo. He is the son of Jason and Alison Devlin, Daniel Johnston and Evon Miller. They survive.

Bo attended Palmyra Early Childhood and went on to graduate from Mississippi Valley State School in 2019. He loved his time attending school and the people who cared for him there.

His mornings before school while waiting for the bus were spent drinking coffee with his Papa Dale, where he wore more than he drank. Bo always looked forward to seeing his bus drivers.

When Bo wasn’t at school, he spent much of his time at St. Louis Children’s Hospital where he gained the affection of the staff. Bo also enjoyed his visits with Dr. Debbie Baumann and nurse, Ashley, at Hannibal Regional Medical Group.

Bo was diagnosed with a rare seizure disorder at six months old, which led to an eventual diagnosis of Lennox-gastaut syndrome Bo didn’t let this define his life. He loved to be surrounded by his family and always had to be louder than the TV and everyone in the room. Bo loved when Papa Matt would sing his favorite song, “Puff the Magic Dragon”, to him. Bo’s favorite thing to do was watch his huge collection of Disney movies.

His smile could always light up a room. Bo truly was a special, sweet soul, and touched the lives of everyone around him.

Bo didn’t gain his wings in his passing; he gained them the day he was born.

He was put on this earth with a definitive purpose best described by his Uncle Tim…..

“Everyone has questions about children like Bo. What happened to him? What does he have? Is there a chance he’ll get better? What caused his condition? Whatever the question may be. What I believe is, before Bo was ever born, God went to him and asked if he was willing to make a sacrifice. The sacrifice of never being able to run and play with his friends. The sacrifice of never being able to play the first baseball game, go to a normal school, have his first dance, his first girlfriend, or get married and have a family. All of the things we take for granted.

“He was asked to make this sacrifice so he could teach all of us how precious life really is. Teach us not to take our normal lives for granted. How we should love more and hate less. To bring out the best of us. To show some of us that have lost that they still have so much more to give.

“I’ve seen firsthand the love that Bo has brought out in people. Bo has affected absolutely every individual that he has ever come in contact with, in some way, shape or form. Whether it was family, friends, or just someone passing bye. He influenced their life without saying a single word.

“We call these children special, they aren’t special because of the way they look or the way they act or because they may not be able to walk, talk, or take care of themselves. I believe Bo is special because he was asked to make a choice and he chose to sacrifice his normal life to help teach us what life is really about.

“We talked on how his niece Ruby, was so attracted to him and really, how all children were attracted to him. It’s not because of how he looked or how he acted or that they just thought he was someone to play with, it’s because the innocence of children they see the angels.

“It was brought up the other night on what do you think his first words were when he got to heaven? I believe his words were, ‘Did I do good?’ ‘Yes, little buddy you did.’ God holds an extra special place in heaven for his angels. So enjoy yours, you’ve earned it. We all are forever in debt to you for teaching us the value of life. We Love You!

Funeral services will  be at 10 a.m., Saturday, July 18, at Lewis Brothers Funeral Chapel in Palmyra Reverend Mark Carpenter will officiate. Burial will be at Greenwood Cemetery in Palmyra,.

Visitation will be from 5 to 7 p.m., Friday, July 17, at Lewis Brothers Funeral Chapel.

Memorials may be made to Palmyra City Park to go towards play equipment for special needs children.

Online condolences and video tribute may be made at www.lewisbrothersfuneralchapel.com.