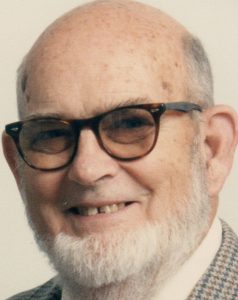 Courtland was born Oct. 30, 1923, in Philadelphia, Pa., to Courtland H. Barnard Sr. and Mary H. Martin Barnard. He was married to Nadine Frances Walton Kleeb on Oct. 11, 1947 at Trinity Evangelical Lutheran Church in Kenosha, Wis. She preceded him in death on April 29, 2010.

He was also preceded in death by his parents; daughter, Linda Daniel; sister, Elizabeth Colangelo; one granddaughter and two great-grandchildren.

After high school he proudly fought for his country as a United States Marines in World War II from 1942 to 1945. He participated in the Consolidation of Northern Solomons and the Philippines Campaign. He held qualifications as a rifle marksman and an aircraft mechanic. He was honorably discharged holding the rank of staff sergeant for the United States Marine Corps.

After his time in the service, he worked in sales for Proctor and Schwartz. On his sales travels he met his wife-to-be in Kenosha. Once married they lived in Pennsylvania and later moved to Missouri where he worked at Quincy Compressor/Colt Industries. He also worked in construction and then retired as a custodian for Palmyra Elementary School.

Not quite ready to call it quits, in retirement he owned and operated The Depot in Philadelphia, for 10 years.

Memorials may be made to St Jude Children’s Hospital and/or Steffenville Cemetery.