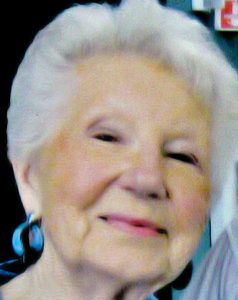 Maurine was born July 23, 1932, in Palmyra, to Richard Leo and Georgia Wilhelmina Groteguth Begley. Maurine was married to Thomas Eldon Johnson on April 13, 1952, at the First Presbyterian Church in Palmyra. He preceded her in death on Oct. 18, 2019.

Maurine went to all 12 grades in Palmyra schools. She was a member of the Honor Society in high school and graduated as valedictorian of the class of 1950.

Maurine was an artist working in oils and later water colors. Her senior year art project was a mural three feet by 10 feet, of Marion County’s history, from pioneer times to the 1950s. It was displayed in the Palmyra State Bank for several weeks.

After graduation, she worked in the accounting department at Moorman Manufacturing Co in Quincy, Ill.

Maurine collected and refinished antiques and continued her oil painting.

Tom and Maurine moved to Mesa, Ariz. in 1971. While in Arizona, she sold Avon for 16 years reaching #1 in sales and winning many awards.

She opened an antique shop in their home. She made reproduction band boxes, constructing the boxes by hand, sewing them as they did in the early 1800s. She sold them in her shop and did custom ones for people who wanted a wedding or other special gift.

Tom gave her a hand-made Santa for Christmas one year and said  “you can make these”, so she did, doing a numbered series of 10 and sold them.

Funeral services will be at 10 a.m., Saturday, Sept. 12, at the First Presbyterian Church of Palmyra. Burial will follow at Greenwood Cemetery in Palmyra.

Visitation will be from 9 to 10 a.m., Sept. 12, at First Presbyterian Church of Palmyra.

Memorials may be made to James E. Cary Cancer Center.