The Great Rivers Council, with 4,554 youth members, awarded only the two Supernova Awards in 2020, and they were the two. 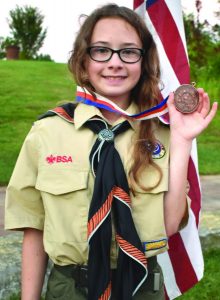 The Scouts BSA Supernova awards recognize superior achievement by a Scout in the fields of science, technology, engineering, and mathematics (STEM).

Scouts are eligible to earn a Supernova Award if they attain the rank of First Class Scout or higher and earn three of the four Nova awards for Scouts BSA.

Then, with their parent’s and unit leader’s help, they must select a council-approved mentor and registered scouter

Marci Bross said completing requirements for the award took more than 60 hours of work and was glad to get it all done.

“It felt good to finish this award,” Marci said.

Meanwhile, Livia was also completing her transition to Boy Scouts.

“I finished Cub Scouts, my Supernova and cross over all on the same day. It felt good to get it done,” Livia said.

Livia did her Supernova research on Dr. Charles H. Townes, a physicist known for his work on the theory and applicaton of the maser.

“I constructed some things, did a CO2 testing experiment and I did some extra elective adventures,” Livia said. “It was fairly easy, and I had a lot of help.

“It was all fun, but I especially liked the construction and catching bugs. 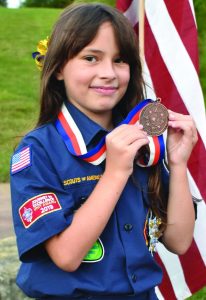 “I  also learned how important good instruments are,” Livia said.

Marci did her research on Dr. Luis W. Alvarez, a Nobel Prize winning physicist and did a science experiment on sound wave interference.

“And, I learned about the inside of computers,” said Marci, who indicated all the work was “not that difficult.”

“But it took a lot of time and repetition,” she said.”I had a lot of help from my family.”

Both said they enjoy science and math in school.

“We are studying the planets, formal logic, the world’s greatest structures and visual mathematics,” Marci said.

Both were also grateful for all the assistance they received while working on their Supernova.

“I would like to thank my Supernova mentor, John Stansfield, Ph.D, finance and my family,” Marci said.

“I would like to thank my Supernova mentor, Mike Greenlief, Ph.D. chemistry, my dad, my mom and my brother,” Livia said.

As for scouting itself both agree they enjoy the outdoor activities the most and credit their brother for helping them.

“I like camping, swimming and working on rank advancement,” Marci said. “My brother was in Scouts, and I did a lot of it with him.”

“I like all the outdoor things best,” Livia said. “I got interested in scouting, because my brother was a Cub Scout and what he was doing looked fun.”

With Supernova behind them, both Livia and Marci plan now to set their sights on achieving the rank of Eagle while staying involved in scouting for as long as they can.

“I want to be an Eagle scout, and do it faster than my siblings,” Marci said.