With the traditional banquet not happening this year due to the COVID-19 pandemic, the Palmyra Chamber of Commerce went a different route in making its annual awards presentations: door to door. 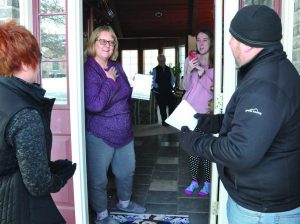 Shelley Lewis was surprised by the Palmyra Chamber of Commerce which arrived at her door Feb. 13 to present her with the Citizen of the Year Award for her late husband, John Lewis. The Chamber was going door to door to present their annual awards instead of at an annual banquet due to the COVID-19 pandemic.

Members of the Chamber’s  board of directors braved the snow and cold temperatures to go to the homes and businesses of the award winners to present them their plaques, and have yet to do one of the presentations.

So far, the award winners are the late John Lewis, Citizen of the Year; Robert Stout, Volunteer of the Year; Northeast Missouri Machine and Pattern, Business Hall of Fame inductee; and Randy and Michele Hopson, President’s Award.

Yet to be presented is the Educator of the Year Award.

Upon accepting the Citizen of the Year Award for her late husband, Shelley Lewis said she was pleased he was recognized for his commitment to the community.

“I was very honored to receive the Citizen of the a Year award for John,” she said. “He loved Palmyra and all his time working in the community. My life, as well as the town of Palmyra, is definitely not the same without him.”

Lewis, who served in several capacities in Palmyra, was named this year’s Citizen of the Year, after being nominated by his daughters.

According to the nomination letter, not only did he assist his family at Lewis Brothers Funeral Home, including completing transfers to St. Louis and Columbia, but also worked as the city’s emergency management director for 13 years, served on the Palmyra Volunteer Fire Department, where he also managed their billing and books from June 1, 2005 to March 1, 2017 and worked for Marion County 911 from June 2007 to June 2015.

His time in emergency services also included a job in administration with the Marion County Ambulance District from 2015 to 2020.

After graduating from Palmyra High School, Lewis enlisted in the United States Navy, and during that time wrote articles about his world travels, which were published in the local newspaper, the Palmyra Spectator.

Upon his return to Palmyra with his wife, Shelley, and daughters, Amy and Amanda, he continued to take pictures for the Palmyra Spectator, a job he had started in high school while also covering local and sporting events.

According to the nomination letter, after returning to Palmyra Lewis became friends with his neighbor, Par Pitts, coach of the Palmyra High School football team, who asked him to serve as the videographer for the football team, a job he did from 2003 to the fall of 2019. “He was looking forward to the next year at the new field and filming from a new press box in 2020,” his daughters wrote.

Shelley Lewis was surprised by the Palmyra Chamber of Commerce which arrived at her door Feb. 13 to present her with the Citizen of the Year Award for her late husband, John Lewis. The Chamber was going door to door to present their annual awards instead of at an annual banquet due to the COVID-19 pandemic.

In addition to his jobs, Lewis was “dedicated to preserving Palmyra history”, saying he took over as “Palmyra’s historian” after the death of Corby Jacobs.

“John had an encyclopedic knowledge of Palmyra’ history, especially the Civil War and the Palmyra Massacre,” his daughters said in the letter, noting he also gave tours at the old Marion County Jail, helped with the Palmyra Massacre and Porter’s Raid re-enactments and spoke to the junior year government class about those events.

He has also visited with PACE students about his travels while in the navy, including a trip to Australia; and spoken at the middle school during their Veteran Day ceremony and at the Memorial Day ceremony at Greenwood Cemetery.

“John Lewis has had an extensive impact on the city of Palmyra,” wrote his daughters. “John was truly one of a kind. He held such pride for Palmyra and everyone in it, and showed it by giving so much of his time to make sure the city ran seamlessly.

“John had a big heart and cared deeply for Palmyra, its history and those who live here,” they added. “He is sorely missed by his family and the community.”

Stout was chosen as Volunteer of the Year for his long-time involvement in Boy Scouts as well as his service on the Palmyra Parks & Recreation Board, the Hannibal Humane Society board and the Palmyra Recycling Committee and with the Veteran’s of Foreign Wars.

“Bob Stout does all of the above, and more, without pay and without seeking out personal recognition, for the betterment of his country and his community,” said fellow recyling committee members Don Nicholson and Andy Bross in their letter of nomination for the award. 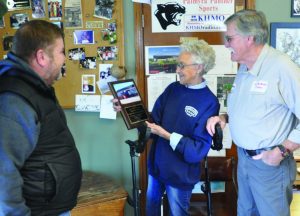 Above, Randy and Norma Smyser, owners of Northeast Missouri Machine and Pattern view the Palmyra Chamber of Commerce Business Hall of Fame plaque they received from Jason Janes, Chamber president.

“It would be difficult to imagine the city of Palmyra running along so smoothly without Mr. Stout racing alongside greasing the wheels.

“Bob is a very humble individual and would not be happy to know that we have nominated him for this honor, but we can think of no one more deserving.”

Scouting has been a long-time passion for Stout, who has served as the Troop 161 Scoutmasters for the past 15 years.

He also serves as a commissioner for the Mark Twain District of the Boy Scouts of America, which covers a nine-county area that includes Palmyra and is a committee member of Troop 2309, the first female Scout troop in the district and Hannibal’s Cub Scout Pack 181.

When he’s not volunteering, Stout works as a community service officer for the Hannibal Police Department.

Stout was presented the award Saturday while volunteering at the Palmyra Recycling Center, and was humbled by the honor.

“I appreciate the honor, but I really don’t feel I deserve it,” he said. “I just like being a part of the community and helping out.”

Stout’s involvement in scouting came despite not being able to be one while growing up.

“I lived in the country and really didn’t have the means to get to town and be involved in it,” he said. “But, it’s a mentoring program, and it does a lot of good things for the kids.

“And, anytime I have a kid in the scouting program, they’re just like mine.”

The Business Hall of Fame plaque was presented to Randall and Norma Smyser, who founded Northeast Missouri Machine and Pattern, which has been serving Palmyra and the surrounding area for 40 years.

Since it started the company has grown from a “fix anything” job shop to a machine shop specializing in rubber compression and injection molds.

The Smysers, who have been  actively involved with the Chamber of Commerce for many years, were honored by the Business Hall of Fame induction, lauded the organization for its involvement in the community.

“It’s where we live. It’s our home, and we all need to work together to keep Palmyra going,” Randy Smyser said.

Receiving this year’s Paint Brush Award, presented annually to a business that has made major improvements to its place of business, was Mast Automotive, owned by Steve and Trish Mast.

The 2020 President’s Award went to Randy and Michele Hopson, lead organizers of the Marion County Fair.

In making the presentation, outgoing President Jason Janes said the Hopson’s deserved recognition for last summer’s fair which was a success despite having to cope with restrictions resulting from the COVID-19 pandemic.