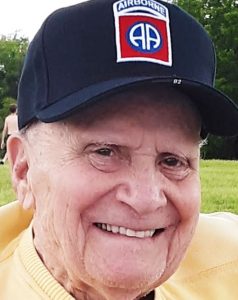 He was an incredibly supportive father and grandfather and a doting husband. He always talked about how lucky he was to have met and married Jean, his “fly girl,” (a former TWA hostess) who he thought hung the moon for the entire 62 years of their marriage.

He was co-owner of Lewis Brothers Funeral Home in Palmyra, where he spent nearly his entire life.

He was a graduate of  of Palmyra High School, Class of 1943 and of Culver-Stockton College in Canton, Mo.

Jack was a veteran of the United States Army, 82nd Airborne Division in World War II.

He was preceded in death by parents, John B. and Stella Wells Lewis; and brother, Bob W. Lewis.

Graveside services will be held at 2 p.m., Friday, May 21, at Floral Hills East Memorial Gardens in Lee’s Summit, Mo.

Visitation will be held from 5 to 7 p.m. Thursday, May 20, at the Porter Funeral Home in Lenexa, Kan.

Memorials may be made to Boots-Dickson Post 174 of the American Legion or the veterans’ association of the donor’s choice in care of Porter’s Funeral Home, 8535 Monrovia St., Lenexa, Kan. 66215.

Online condolences can be posted at www.porterfuneralhome.com