Casey Alexander Krieg, 34, Basco, Ill., went to his eternal home with Jesus on Sept. 17, 2021, after putting up the hardest fight that his doctors and nurses said they had ever seen. He was surrounded by his wife, his family and friends as they sang hymns, played videos of his children and held his hand as he entered into Heaven. 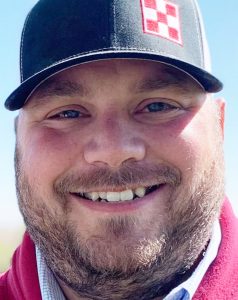 He graduated from Carthage High School in 2006 and went on to graduate from Western Illinois University in 2010 with a degree in agri-business.

While at WIU, Casey was a proud member of the livestock judging team and interned for the band “Alabama’s” Tennessee River Music Inc., Ranch.

One of Casey’s proudest achievements was his high school State FFA Degree, the highest award you can achieve in the state. He was also a member of the Blueboy football and baseball teams. Casey also had perfect attendance throughout school.

On May 3, 2014, Casey married the love of his life, Katy. The years may have been cut short, but it was the greatest love full of so many great memories.

On May 7, 2015, they welcomed their beautiful daughter, Nora Grace, and on Jan. 7, 2019, their adoring son, Wade Lee. They are without a doubt his greatest accomplishments in life.

Casey was a nutrition specialist for Land O’ Lakes and Ursa Farmers Co-Op, specializing in Purina nutrition. He was amazing at his job.

Casey was a devoted husband, father, son, brother, uncle, grandson, friend and man of God. He enjoyed working with his cattle on the farm that he and his wife had recently purchased.

He loved quoting movies with his brother and friends, talking about sports, listening to his music, golfing, talking with anyone and everyone, especially his customers, about cattle and farming, and being present in every day.

Casey was an avid St. Louis Cardinals, Kansas City Chiefs and Fighting Illini fan. He led Bible studies, was always reading God’s word or listening to sermons or podcasts to be able to witness to others. He was a tried and true cattle enthusiast, especially with Hereford cattle. He loved working with his father on their family farm more than anything.

He is survived by his wife Katy; two absolute loves of his life, Nora, 6, and Wade, 2 1/2; his parents, Galen and Kim Krieg; siblings, April (Jason) Lemley, Erin (Ryan) Biery and Cole (Ashley) Krieg; mother-in-law and father-in-law, Mike and Sheila Kirby; sisters-in law, Lynsey (Curt) Means and Marissa (Justin) Stofferahn; many nieces and nephews whom he adored, and one great-niece on the way, Zachary (Jasmine) Lemley, Abigail and Megan Lemley, Katherine, Anna, and Lucas Biery, Elly, Avalyn, and Raef Krieg, Sam and Riley Means, Hillarry and Mallori Thomas; and Freddy and Verity Stofferahn.

He is also survived by many aunts, uncles, cousins and close friends, Ryley Smith and Mitchell Housewright.

He was proceeded in death by his grandparents, Clifton and Laura Carle and Earnest and Alberta Krieg; and one aunt, Jan Carle.

To know Casey was to love him. His smile lit up a room and his overwhelming joy could lift any spirit. All he wanted in life was to leave a legacy, bring others to Christ and be valued.

Job well done Casey. “You always believed that the good Lord would provide and he always had. Take off your gloves, and put them down, no more sweat and worry for you now. Your labor is done, your home now is heaven; no more must you wait. Your legacy lives on, your love of the land, and we will close the gate.”

Memorials may be directed to the family of Casey Krieg and will be used to establish an education fund for his children.