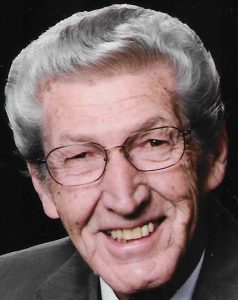 Ron graduated from Cleveland Chiropractic College in 1958 and practiced as a chiropractic physician in Springfield, Mo.; and Palmyra, for over 57 years.

He was a man of many passions who loved woodworking and computers, boating at Table Rock Lake, traveling, and flying his own plane. An avid sports fan, he enjoyed St. Louis Cardinals baseball, Kansas City Chiefs football, and, of course, Mizzou Tigers football.

Ron served his country by joining the Naval Air Reserves.

His family, friends, and patients will remember him for the respect, understanding and wisdom with which he shared with others. His great love of life and dignified spirit will be missed by all those who knew and loved him.

Ron’s greatest passion was time spent with his family and especially times when they would come to visit him and Shirley at their home. There were many amazing family memories created in these moments.

Ron was also the president, and co-founder of Concept 21- Round House Manufacturing Company from 1971 to 1977.

He was a member of Christ Church Unity of Springfield, Mo. He served as a member of the board, taught classes and wrote articles for the church.

The celebration of life service will be held at 11 a.m., Friday, Oct. 29, at Lewis Brothers Funeral Chapel in Palmyra. Pastor Marty Smyser will officiate.

Friends and family are invited to Ron’s visitation that will be from 5 to 7 p.m., Thursday, Oct. 28, at Lewis Brothers Funeral Chapel.

Memorials may be made to Cuddle Cat Rescue or Northeast Missouri Humane Society (NEMO).