With his parents at his side, holding his hands, Gage Thomas Leftwich, 22, was welcomed into the warm, loving arms of his Lord at 3:32 p.m., on April 23, at Blessing Hospital. 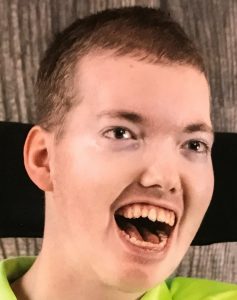 Blessed now with a heavenly body, he can walk, run, speak, dance and experience the joy of no physical limitations. While to his family he was considered perfect, he is now healthy and strong, free of the constraints of a wheelchair, medications and physical complications.

Born Sept. 24, 1999, at Blessing Hospital to Greg and Jennifer Leftwich, Gage joined a sister, Bailey, and a brother, Taylor, to complete their family.

Early medical complexities led to hundreds of appointments with Dr. Larry Minnick, his favorite and most dedicated pediatrician, as well as nearly every department at St. Louis Children’s and Shriner’s hospitals. He always received the best care and was finally diagnosed at the age of 14, becoming the ninth child in the world with NGLY 1 Deficiency, an ultra-ultra-rare degenerative disease affecting the muscles, nerves and brain.

Gage had finally found his tribe and the search for a cure began. Gage was studied extensively at the National Institute of Health in Bethesda, Md., Stanford University in California, and by the Grace Science Foundation, where his and other NGLY children’s cells, tissue and blood were used and studied to help develop a gene therapy which is now awaiting FDA approval for a clinical trial. Gage’s purpose is now complete as he is one of the pioneers in the development of a treatment and cure for children with NGLY 1 Deficiency.

Gage attended Mississippi Valley State School in Hannibal and graduated in September 2020. Despite the degenerative nature of his disease, his teachers, aides and therapists all poured their souls, mixed with a lot of love, into making him as strong and able as possible.

He would often take his teacher or therapist’s hands to sign “all done”, or feigned going to sleep, before they’d even started, but they knew him well enough to call his bluff and complete his therapies before ending with smiles.

Gage never said a word, but communicated effectively with his eyes. It was easy to understand what he wanted or needed if one took the time. God could not stop revealing Himself through a child who never uttered a single word and found great pleasure to take a disabled boy in the eyes of the world and show His truth.

Gage had a pure soul who wanted nothing more than to be with his family; holding his hand, looking into his eyes, talking to him, watching a St. Louis Cardinals game, listening to music, reading a book or watching TV.

He loved toys that lit up, played music or asked questions. He could memorize the pattern of a toy or the sequence of answers with ease and could engage in several toys at the same time without looking at them. Gage found joy in simple moments such as car rides, seeing the oncoming headlights, or the sound of traffic as it went by.

Gage loved participating in races with his parents, riding in his Hoyt jogger while his parents ran or rode bikes, supervising them when they went swimming, or even watching his dad sneak ice cream bars out of the freezer when he shouldn’t.

Surrounded by a community that embraced him, he was treated with love, dignity and respect wherever he would go.  The community and his tribe supported the family’s quest to fulfill Bucket List adventures.  Gage swam with dolphins, rode a lazy river, went kayaking, attended a Cardinals game, traveled to Puerto Rico through Make-A-Wish, and the Bahamas, visited zoos and aquariums, watched his favorite athlete Jon Crosby compete in Spartan and Ironman races, hiked in the deserts of Arizona, and traveled to Disneyworld.

The family motto has always revolved around LIVE A GREAT STORY. Gage has a great story.

Gage ran into the arms of his twin sibling who returned to God before birth; his Uncle Pat Sheridan; and grandfathers, Dr. Robert Brown and Kent Leftwich.

Celebration of life will be held at the Mission Hill Baptist Church in Palmyra, on April 30, from 11 a.m. to 1 p.m., with a service held at 1 p.m., by the Lewis Brothers Funeral Chapel.

Memorials can be made to Mississippi Valley State School in Hannibal; the Make-A-Wish Foundation (Missouri and Kansas); Shriners Hospital; and the Grace Science Foundation in Menlo Park, Calif.

Gage lives on through everyone who felt connected to him or was inspired by him. Those who knew him, or knew of his story, have lost a shining light. But in the ways he touched the hearts of many, may he live on.