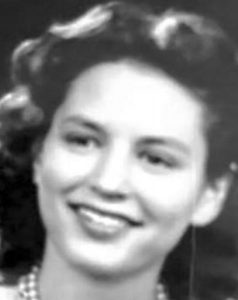 After Mary Louise graduated from LaGrange High School in 1948, she matriculated to Culver Stockton College, graduating with a degree in home economics. She continued her education at the University of Missouri in Columbia and achieved a master’s degree.

In 1954, upon graduation she started her first job at Michigan State University as an instructor.

In 1955 she met Herbert Waldo Olson, also an instructor at MSU in East Lansing, Mich., and they were married in 1956.

After her second child, Mary Elizabeth was born, Mary Louise decided to dedicate her life to being a fantastic and wonderful mother.

She had many and varied interests and was an avid reader. These interests collected around quilting. When she wasn’t filling her home with love and warmth for Herbert, her children and treasured grandson, Ruslan Erlend Olson, she was joyously sewing a quilt.

She is survived by Scott, Mary Elizabeth and Christopher, and grandson, Ruslan Olson, and brother, Nolen V. Leach II.

The family will gather in Maywood, Mo. this summer for the interment of remains of Mary Louise Olson, Herbert Waldo Olson and Russel Herbert Olson.

Fond memories and expressions of sympathy may be shared at www.greastlansing.com for the Olson family.