It was a rainy and foggy game that almost wasn’t, but the Panthers (3-0) turned the gloom into a celebration when they shot out to a 33-0 lead by midway of the third quarter. 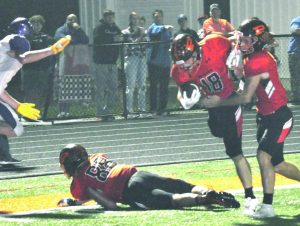 Palmyra’s Hayes Miller (18) finds an open path toward the end zone for Palmyra’s second touchdown of the night.

After struggling the previous week, the offense exploded for 414 total yards and six touchdowns, while the defense was its usual dominant, holding the Indians two 24 first-half yards while forcing eight turnovers for the game.

“We did exactly what we wanted to do, and I think we’ll remember this forever,” said senior Ross Arch, of the landmark win.

The victory not only was the first one in the new stadium, but it came close to not happening at all.

Palmyra was originally scheduled to host Macon in their first Clarence Cannon Conference game of the season, but the Tigers had to bow out at about 3 p.m. due to the COVID-19 virus.

Meanwhile, Hallsville learned its original opponent, Versailles, was also forced to cancel due to COVID, and Palmyra and Hallsville were able to make connections for the resulting game with a 7:30 p.m. starting time to allow the Indians to make the two-hour drive to Palmyra.

“I happened to call the right guy, and he knew somebody, and within a half hour we had her switched up,” said Coach Kevin Miles of the last-minute rescheduling.

Of course it meant playing a team they hadn’t prepared for ahead of time, thanks to a pandemic. 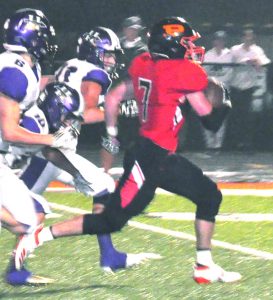 Above, Palmyra’s Ross Arch is chased by a host of Hallsville defenders on his way to a 32-yard touchdown run in the first half.

“I sent (Hallsville) a film at 3 p.m. and Coach (Justin) Conyers said they watched it on the way over here,” Miles said, noting his players were able to watch some game film while they waited for the Indians to arrive.

“It was a tough night with all the changes that happened, but we handled it well and planted a new seed,” said senior running back Wade Begley.

Palmyra set the tone for the game from the beginning, driving after the opening kickoff on a five-play, 65 yard drive capped by a one-yard touchdown plunge by Begley.

The Panthers would not score on their next two possessions but would finish the first half by scoring touchdowns on three of their final four drives.

Sophomore wide-out Hayes Miller put the Panthers up 13-0 with an 18-yard touchdown ruin on a jet sweep.

Begley would follow with his second rushing touchdown of the night from three yards out, and running back Ross Arch would start his big night with a 32-yard touchdown burst up the middle to give Palmyra a 27-0 lead at the half.

Quarterback Brody Lehenbauer all but put the game away with a four-yard touchdown run with 7:17 left in the third quarter.

The Panther defense’s shutout streak would finally be broken in spectacular fashion on the next play from scrimmage when Hallsville’s quarterback Tyger Cobb hit pass receiver Landyn Sievers wide open down the left sideline on a 76-yard catch and run. 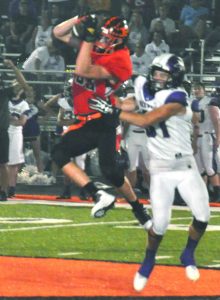 Palmyra’s Peyton Timbrook went to the air to snag a pass from Brody Lehenbauer for a 31-yard gain and a first down.

Hallsville made it a 33-16 game on their next drive capped by an 11-yard touchdown run by running back Harrison Fowler.

And, the Indians made the game look a little more interesting when they executed a successful onside kick and get the ball back on the Palmyra 43 with 1:44 left in the third quarter.

However, that would be the closest they would reach in getting back into the game as the Indians fumbled the ball four plays later and the Panthers would intercept passes to end Hallsville’s final possessions.

Arch would ice the game with a 59-yard touchdown run after the fumble and Zane Meyers, Landyn Smith and Begley would intercept passes, the last two going for pick-sixes and Begley’s coming on the final play of the game.

Lehenbauer completed just four of 12 passes for 95 yards and would have some touchdowns strikes if not for a penalty and a couple of drops.

Quade Plunkett had the longest pass completion for 48 yards before being stopped on the Hallsville one, setting up the team’s first score.

Arch would also lead the Panther defense with 4.5 tackles including four solo tackles and one for a loss.

Palmyra made life difficult for Hallsville by gathering nine tackles for losses. Senior lineman, Weston King caused the most disruption with 2.5 tackles behind the line.