The PHS girls tennis team competed in a tournament at Marshall Saturday and came away with a win, tie and loss. 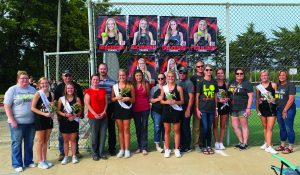 Winning singles matches against Grain Valley were Reese Gottman, by forfeit by injury at 8-3; and Perkins, 10-5.

The Lady Panthers also went to 3-0 in dual play with an 8-1 victory at home over Mexico, Tuesday.

Winning doubles matches were Rindom and Maura Gottman, 8-6; Durst and Ingram, 8-2; and Reese Gottman and Perkins, 8-3.

Winning medals for Palmyra were the No. 1 doubles pair of Rindom and Maura Gottman, who placed first in that position.