The PHS varsity football team showed it can win in the most dramatic of fashions with their 15-14 win at Clark County Friday. 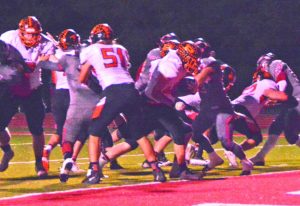 Facing tough odds, the Panthers took the ensuing kickoff and drove down field quickly, only to bog down at the Clark County 17 with only 12 seconds left.

Coach Kevin Miles’ choices were limited to trying to earn a first down on fourth and 10 or attempting a 34-yard field goal.

Considering that his kicking choice, Landyn Smith, had made only one extra-point and no field goals all season, it appeared to be a slim-to-non opportunity.

But what do odds know about football, really?

Smith put the ball through the uprights to preserve the Panthers’ perfect records.

“I had the utmost confidence that Landyn would make the kick. He is an excellent kicker, and we believed in him to WalkItOut and do his part in this win,” said Miles, quoting the team’s slogan for the season.

The victory solidified Palmyra’s top district seeding and kept them even in the Clarence Cannon Conference title race with Centralia.

The contest at Kakoka was a typical physical, grinding battle with neither team finding the end zone in the first quarter.

The Panthers finally got an offensive rhythm in the second quarter putting together two drives capped by one-yard touchdown runs by Payton Timbrook and Brody Lehenbauer.

An extra-point attempt was no good following the first score and a two-point pass went incomplete after the second, leaving Palmyra’s lead at 12-0 going into the second half.

Palmyra’s offense struggled after the break, while Clark County’s broke through late in the third quarter when quarterback Sam Wheeler connected with Layne Sommers on a 37-yard scoring strike at the 1:10 mark.

Wheeler and Sommers connected again for a 20-yard touch pass with 1:09 left. This time, Clark County took the lead on Wheeler’s successful two-point pass to Sommers.

But Palmyra answered with their winning drive, thanks to big runs of 40 yards by Zane Meyers and 16 yards by Timbrook to reach the Clark County 17.

Despite his team’s second lowest point total of the season,  Miles was pleased with how his team found ways to score.

“He is improving every week and continues to make great decisions.”

Meyers and Hayes Miller each had three receptions for 70 and 65 yards respectively.

“(The Indians) were loading the box and were super aggressive on defense,” Miles said.

Ross Arch was Palmyra’s leading rusher with 37 yards on 13 carries.

Turnovers were not much of a factor with Palmyra fumbling just once, while Collin Arch picked off a Clark County pass.

Smith, was also a star on defense, leading the team with seven solo tackles, while Weston King collected five solo tackles and four assists, 3.5 of which went for losses including a sack.

“We did a few things differently on defense, and they played a great game,” Miles said. “The line played a good game on both sides of the ball and are improving each week.”

The Missouri State High School Activities Association announced it will play its Show-Me Bowl games at different locations this fall.

Due to venue usage conflicts with Memorial Stadium/Faurot Field in Columbia, MSHSAA will use three high schools in mid-Missouri to host the 11-man football games.