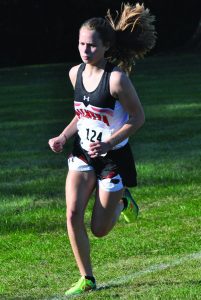 “The Girls did well,” said Coach Nicholas Koetters. “We thought we’d have a chance to win, but we had a couple of runners not finish where we thought they would.

“But, Centralia is also very good so we were going to have to run perfectly in order to win the meet.”

Lauren Sheputis, a freshmen, led the team with a sixth place finish in a time of 23:14 and was followed seven seconds later by Aly Noland, a sophomore, in seventh place.

Both earned first team all-conference honors with their performances.

Brookfield’s lone competitor, Alex Sharp, won the girls competition in a time of 20:52. Casey Hathaway turns a corner during the CCC meet in Flower City Park.

“I was happy how they finished as individuals,” Koetters said.

Centralia’s Nate Riddle and Clark County’s Ethan Nelson were locked in a close race over most of the course before Riddle edged in front down the stretch to win in a time of 18:36, 11 seconds ahead of Nelson. 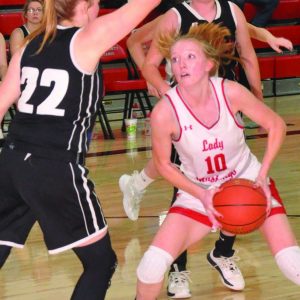