The PHS Panthers scored on three of their first four possessions on their way to a convincing 35-8 win at home over depleted Clark County in the district semifinals.

Palmyra will now host Monroe City this Friday in the district championship game. 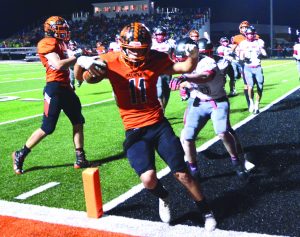 Palmyra’s Zane Meyers goes through the corner of the end zone for one of his three touchdowns Friday against Clark County. (NEMOMedia photo by Sue Scott)

Quarterback Brody Lehenbauer threw three touchdowns while Landyn Smith and Zane Meyers rushed for two others and the Panther defense intercepted three passes and held a depleted Clark County squad to 145 total yards and a one late touchdown.

Palmyra went to work on the Indians quickly as senior linebacker Wade Begley intercepted a pass on the game’s third play from scrimmage and running back Landyn Smith scored from 18 yards out on Palmyra’s first play.

An interception by senior defensive back Zane Meyers on Clark County’s next possession set up Palmyra’s next score, a six yard touchdown run by Meyers who also caught a 22-yard pass earlier in the drive.

The Panthers were forced to punt on their next possession, but resumed their scoring ways  with a 12-play, 87-yard drive capped by a 42-yard catch and run by Meyers for a touchdown to go up 20-0 at the outset of the second quarter.

Palmyra got another quick chance to extend their lead when linebacker Adam Goodwin intercepted a pass to give the Panthers the ball on the Clark County 41.

Palmyra would fumble three plays later but score one more time in the first half on an 18-yard pass from Lehebauer to Abe Haerr, who also caught a two-point pass from Lehenbauer to put the Panthers up 28-0 with 5:52 left in the half.

The Panthers initiated a concontinuous clock at the 7:33 mark of the third quarter with their final touchdown of the night as Meyers found the end zone for the third time on a 24-yard pass from Lehenbauer.

Meanwhile, the Panther defense held a short-handed Indians squad out of Palmyra territory until late in the first quarter.

Clark County has been dealing with the effects of COVID-19 and had only 20 players suit up out of 50-player roster.

“You do hate it for Clark County and Coach (Ethan) Allen, because they have a great program,” said Coach Kevin Miles. “You always want to beat the best, and I hate they did not have a full squad.”

Clark County did have two scoring chances in the second quarter, reaching the Palmyra 29 and 13 before the drives failed on fourth down.

The team’s only score came on their final possession on an eight-yard pass from quarterback Sam Wheeler to Layne Sommers.

Clark County was held to 80 yards passing and a paltry 62 yards rushing on 34 carries. The Indians converted just twice on 14 third-down attempts, while the Panthers collected eight tackles for losses.

Palmyra had a balanced offensive attack as Lehenbauer completed 10 of 17 passes for 158 yards, while the ground game went for 162 yards on 29 carries.

Weston King was Palmyra’s top tackler collecting eight and a half, including seven solo and three-and-a-half for losses.

Josh Lickfeld added to his team lead in sacks with one-and-a half, but said it is a testament to the entire line.

“It’s a team effort,” he said. “If someone is blocked, the other ones are going to get there.”

Begley returned to action from injury to play on defense, but running back Hayes Miller did not dress out after hurting his leg during the team’s last game two weeks ago.

“Some guys just weren’t ready yet, and the risk wasn’t worth the reward,” Miles said.