The Panthers called a timeout with just under eight minutes left in regulation, at the crucial moment of their 26-22 district title win over Monroe City Friday. 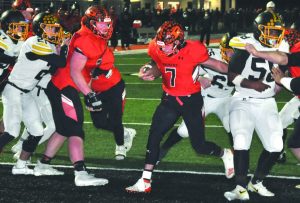 Palmyra’s Ross Arch (7) runs through a large hole in the line for the Panthers third touchdown against Monroe City Friday, while lineman, Weston King blocks out two Monroe defenders (left).

After building a strong 20-8 halftime lead, Palmyra was facing a gut-check after Monroe trimmed the lead to four, and were facing fourth down and five from the Monroe 25 yard-line.

In a game of momentum swings, failure to earn a first down and score could have very well spelled doom for the Panthers’ dream season.

Quarterback Brody Lehenbauer said he had a pass play in mind, and the offensive unit and coaches agreed with him.

After taking the snap, Lehenbauer rolled to his right, watched as the play developed and threw a pass to Zane Meyers, who caught the ball at about the five and went into the end zone for what would turn to be the clinching score.

“I wanted to get out of the pocket a little bit, just in case we had some pressure,” Lehenbauer said after the game. “They bit on my running ability, and I just lobbed it up to Zane, because I knew what he could do.”

Monroe City still provided some drama-scoring with 46 seconds left to draw to within four–but Meyers would grab the ball again for safe keeping on Monroe’s ensuing on-side kick attempt, and the game was over.

The senior play-caller threw for 164 yards and two touchdowns and ran for another, but credited others for the biggest victory of his career. 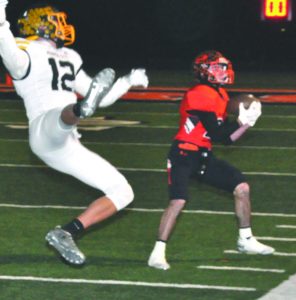 Palmyra’s Collin Arch holds onto the ball after catching a pass from Brody Lehenbauer for long gain against Monroe City that led to Palmyra’s second touchdown of the game. 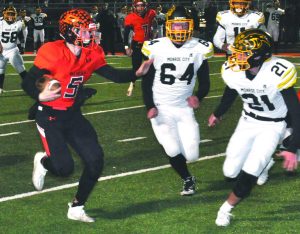 “A shout out to our fans, who were counting on us,” said an emotional Lehenbauer. “Monroe did a great comeback in the second half, but we had a lot of

fight in our guys, and I can’t say enough about our team.”

Monroe City grabbed the early momentum after scoring on the game’s first possession, an 11-play 61-yard drive capped with a one-yard touchdown run by Ceaton Pennewelll and a two-point conversion.

Monroe then stuffed Palmyra for a three-and-out and drove into Palmyra territory to the 34 yard line for a chance to go up by two scores.

But, Palmyra defensive lineman Braden Madden intercepted a pass thrown right at him and returned it to the Monroe 35.

And, on the very next play, running back Ross Arch blasted through a hole in the middle of the line and was gone for  a touchdown to trim the early deficit to two.

Palmyra would maintain that new-found momentum for almost the rest of the half, as the defense stopped Monroe on three plays, and took the punt on its own 36.

On the very first play, Lehenbauer rolled to his right, but found himself under heavy pressure, yet somehow braced himself right at the sideline and lofted a long pass to a well covered Colin Arch, who caught the ball and went out of bounds at the Monroe 26 for a 38-yard gain.

Arch was an unlikely target considering the sophomore started the season as a quarterback.

“But, a few guys got hurt, and we had to move guys around, so Collin comes in and does just about as good as anybody else can,” Lehenbauer said. “I can’t say enough about our receivers.”

Three plays later, his older brother, Ross, shot in from the two to give Palmyra a 12-8 lead.

Colin Arch would soon catch another pass, this time from the Monroe quarterback, putting Palmyra in business again at its own 15. 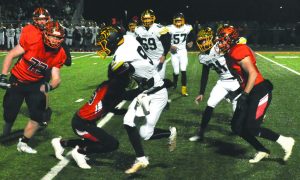 Then, on the very next play, his older brother, Ross, would strike again, blasting through the line and several tackles before finally being brought down at the Monroe 32.

Three players later, Lehenbauer scored from the five, and also converted a two-point run to put Palmyra up 20-8 with 9:05 left in the half.

Palmyra’s defense then stepped up to stop Monroe a yard short of a first down on two straight plays from the Palmyra eight.

The offense looked to put Palmyra up by three touchdowns and reached the Monroe 21 only to lose the ball on a fumble at the Monroe 18 with 29 seconds left.

Monroe scored first in the second half to make it 20-16 Palmyra on a 26 yard pass from Kyle Hays to Logan Buhlig followed by a two-point conversion.

And Monroe appeared poised to take the lead early in the fourth quarter, reaching the Palmyra 38, only to again be stopped on two straight plays one yard away from a first down, the last one stuffed for a loss by Palmyra lineman Luke Triplett.

In the end, the contest was one of big plays, with Palmyra making the most.

“You’ve got two great teams, and that’s going to happen,” said Coach Kevin Miles. “I thought our defense did a great job of doing great things, and I can’t say enough about them.”

Palmyra’s defense held Monroe’s running game to 118 yards on 44 carries and kept the passing game in check in the first half.

Hays completed more passes to Palmyra defenders than to his own receivers before the break, and didn’t connect with his favorite receiver, Buhlig until the third quarter, finishing with seven completions in 17 attempts for 143 yards.

Hays was also sacked three times by Weston King, Josh Lickfeld and Quade Plunkett. King ended up with a team-high 7.5 tackles including 3.5 for losses.

Palmyra’s Ross Arch accounted for virtually all of Palmyra’s running attack, gaining 174 of the 177 total rushing yards on 22 carries.