The PHS varsity girls bounced back for a third-place finish at the Monroe City Tournament.

After losing by 23 points to South Shelby in the semifinals the day before, the Palmyra (2-1) got out to a strong start and finished strong for a 50-41 win over Mark Twain Friday. 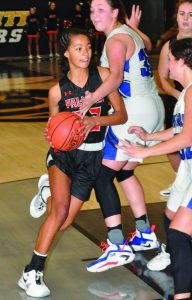 The Lady Panthers lead 13-8 early before the Lady Tigers trimmed the edge to one by the half.

However, Palmyra out-scored Mark Twain 30-22 the rest of the way behind two freshman.

Taytum White came off the bench to score 12 of  her game-high 18 points in the second half, hitting five field goals, including a three-pointer, and hitting seven of her 11 free throws.

South Shelby went on to lose to Monroe City, 59-50, in Saturday’s championship game. 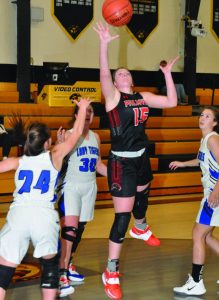 The Lady Panthers barely survived the opening round of the tournament, coming back from a double-digit deficit in the second half to get by sixth-seeded Paris, 48-46, last Tuesday.

Trailing 28-15 at the half, Palmyra trimmed Paris’ lead by five in the third quarter before out-scoring their opponents 19-9 the rest of the way for the win.

Jansen Juette keyed the third quarter rally with eight points, while Abby Redd stepped up with eight of her team-high 14 points in the fourth quarter. 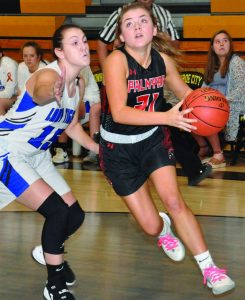 The Lady Panthers did not have any comeback magic in their 58-33 loss to South Shelby, Thursday.

Palmyra eight field goals and 19 points in the first three quarters, while the Lady Birds  jumped out to an 23-5 lead and a 28-point edge going into the final quarter.

This week, the Lady Panthers are set to travel to Mark Twain, Thursday, for the game originally scheduled for Dec. 1.