The PHS wrestling team was busy last week, traveling to meets in Warrenton and Moberly, and hosting a match against Hannibal.

The Panthers capped the week Thursday with a trip to Warrenton, where they beat Battle, but fell to Mexico and Warrenton. 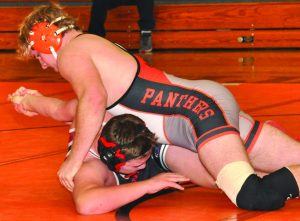 Palmyra’s Luke Triplett controls his Hannibal opponent during a match on the home mats last Monday. Triplett would later earn a pin.

Palmyra won all three actual matches in a 15-6 win over Battle.

The Panthers also traveled Tuesday to Moberly where they lost to the host team, 72-12, and beat Boonville, 39-24.

The Panthers went 2-7 against Moberly.

Winning for Palmyra were:

Palmyra lost 3-6 to Hannibal on the home mats Monday.

Winning matches for Palmyra were:

The Palmyra girls were in action at Moberly Tuesday and defeated Boonville 30-18.

Mundy went 4-2, earning all of her victories by fall over opponents from Parkway South, Kirkville and Union (two).