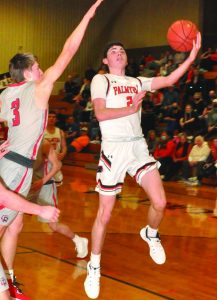 Palmyra’s Bear Bock goes in for a layup against Clark County Tuesday.

No less than six Panthers sank three-pointers in the game including Aaron Stamper, three, and Zane Meyers, two. Stamper and Bear Bock led the team in scoring with 17 points each.

The Panthers opened the week by doubling up Clark County, 46-23, on the home court, Tuesday.

Bock and Stamper led with 11 each and were followed by Haerr, nine, Stice, five, Lochman, four, Meyers, two, Loman, two, and Plunkett, two.

The Panthers were scheduled to host Monroe City, Tuesday, before traveling to Bowling Green this Friday.