After a week off due to excessive winter weather, the PHS boys varsity basketball team completed the regular season schedule with a win at Highland and a loss to Monroe City. 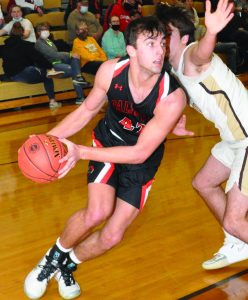 Palmyra’s Abe Haerr drives to the basket against Highland.

The Panthers (12-8) earned some confidence going into this week’s district tournament with a 63-46 victory at Highland Friday.

Palmyra got out to a 12-4 lead and maintained their edge the rest of the way.

The game could be a preview of a possible district title-game match-up between the top-seeded Cougars and second-seeded Panthers.

Zane Meyers and Aaron Stamper led the Panthers with 16 points each.

The Panthers finished conference play with a 5-2 record.

The Panthers finally returned to the court Thursday and scored their lowest point total for the season in a 29-52 loss at home to Monroe City.

The Panthers open Class 3, District 6 play in the semifinals Wednesday against the winner of Monday’s quarterfinal contest between Louisiana and Mark Twain.