The PHS varsity golf team was successfully busy last week, winning two of three events while getting edged by a stroke in the other.

The Panthers won their own invitational tournament Wednesday by 29 strokes over second place Mexico. 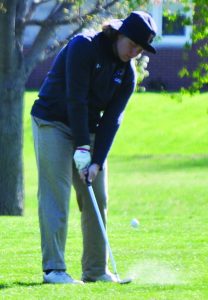 Also playing for Palmyra’s No. 1 team were Brady Shively (77), who beat out Mexico’s Aiden Knifel in a playoff for second place, Laydin Lochman (82), Elijah Edwards (83) and Aaron Ritchey (91).

The Palmyra varsity team carded a 325, but Troy did one-stroke better at the Hannibal Invitational Friday at Norwoods.

Webster won individual honors with a 74, three strokes better than the second place finisher from Troy. 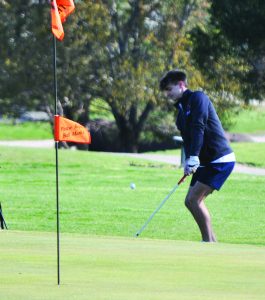 Palmyra’s Laydin Lochman chips on to the green during the Palmyra Invitational Tournament.

Palmyra hosted a junior varsity tournament last Monday, and its No. 1 team took first while the No. 2 team finished fifth out of a field of 11 teams.

Ritchey shot an 82, the second best round score of the day, to lead the No. 1 team, which carded a 372, 20 shots ahead of second-place South Shelby.

South Shelby’s Dax Durbin led all golfers with a 10-over-par 80.