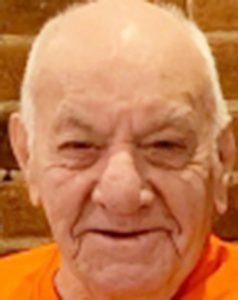 Frankie was a life-time local farmer. He helped his brother, Harold Schwartz of Schwartz Implement, for many years.

He served in the United States Army during the Korean Conflict.

Frankie was a member of the Knights of Columbus at St. Joseph Catholic Church in Palmyra. He loved to volunteer at the Palmyra Nutrition center and Douglas Community Center.

Frankie looked forward to Kawasaki Mule rides with family and friends. He was a soft-hearted family man and enjoyed spending as much time as he could with his family and extended family.

A Mass of Christian burial will held be at 10 a.m. on Tuesday, Sept. 21, at St. Joseph Catholic Church in Palmyra. ather Greg Oligschlaeger will officiate. Burial with full military honors by American Legion Post #174 Boots-Dickson at Holy Family Cemetery in Hannibal, Mo.

Honorary pallbearers will be members of the North River Old Iron Club.

Friends and family are invited to Frankie’s life celebration at a visitation that will be from 5 to 7 p.m., Monday Sept. 20, at Lewis Brothers Funeral Chapel in Palmyra. Rosary will follow at 7 p.m., performed by Deacon Bob Leake.

Memorials may be made to North River Old Iron Club or the Palmyra Nutrition Center.

Online condolensces may be made and video tributes viewed at www.lewisbrothersfuneralchapel.com.